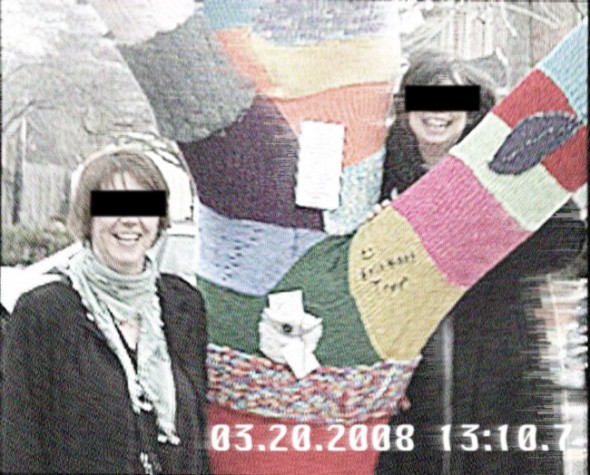 Surveillance video of a bombing site from 2008 shows the suspects currently under arrest posing triumphantly. Identities have been obscured pending a trial.

Retiring Yellow Springs Police Chief Jaw Goatee seems to have saved up big for his swan song, as the results of a three-year sting operation were revealed yesterday with the successful break up and neutralization of a local yarn bombing cell.

After months of painstaking intelligence gathering and infiltration by informants, “we were finally able to move in”, Goatee said. “We went slow at first, staking out knitting circles, fiber art fairs and the occasional, aging macramé group.”

What had initially seemed a nefarious plot perpetrated by outside groups with backing from wool-rich countries like New Zealand and Uruguay turned out to be domestic, homegrown. “It teaches us a lesson in profiling,” Goatee said. “We were looking all around us, everywhere but right here; dyed-in-the-wool locals, if you will pardon the phrase.”

The question then becomes, what drives local born-and-bred citizens to such extremes? Goatee had no answer, yet. “It puzzles me as much as anyone. We have two bombers in custody and under interrogation, and are tying up a few more loose ends,” he said, excusing the expression. “I hope to find out, too. I can’t lean on a signpost and write a ticket anymore without getting covered in joyfully-colored fibers.”

Art therapist and life coach Louise Jeeze, who assisted the police with their endeavors, shed some insight on the possible motivation of the bombers. “It’s about the textures, I think, the juxtaposition of the textures. Think of a patch of bright pink soft yarn against a creosote-soaked telephone pole; think of metal against fur.” Jeeze said. “The temptation can sometimes be overwhelming, and the id takes over all reason.”

Others have simply speculated that the bombers wished to make a nuisance of themselves, seeking attention by committing random acts of art. This leaves even more questions unanswered, as the lack of all logical motivation makes predicting future bombings near impossible.

“Well, that’s my successor’s problem,” Goatee said, cleaning off his uniform with a well-worn lint roller. “I’m just glad we were able to unravel all the clues, trace back each thread, and that the long yarn’s over, if you’ll forgive the choice of phrases.”