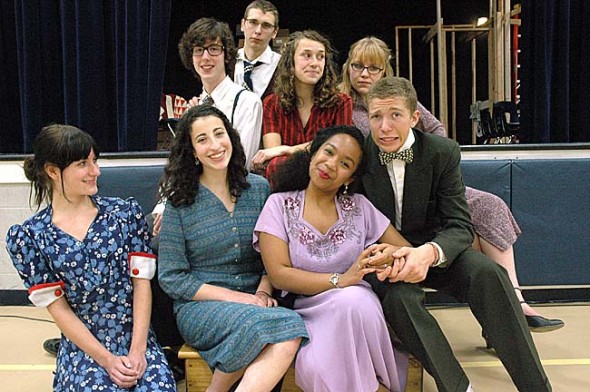 No one ever talks about Jews in Atlanta, even the Jews in Atlanta. That’s why Alfred Uhlry’s romantic comedy about a small Jewish community living in the capital of the South in 1939 opens with a Christmas tree. The play, The Last Night of Ballyhoo, will be presented by the Yellow Springs High School thespians this weekend and next at the Mills Lawn auditorium.

Set on the day of the premiere of Gone with the Wind, the play’s racial and ethnic themes are seen through the divide in the Freitag family, some of whom are ethnic Jews living life as American as possible. And no one is more ecstatically ignorant of her own identity than young Lala, played with exuberance by Zyna Bakari. Though on the other side of the world Hitler has just invaded Poland, what Lala wants most of all is to go to the Ballyhoo cotillion and find a real romance to match the one in her head.

“Lala is hard to like … she’s ignorant, immature, flighty and obnoxious,” Bakari said. “What makes the play so ironic is while Hitler is starting a war against the Jews in Europe, this Jewish family in Atlanta is not connected with it at all.”

The Freitag family’s German Jewish roots get tangled with those of their more orthodox Eastern European friends, who have maintained closer ties to their ethnic and religious roots. One of those characters includes the brash Peachy, played by Ben Green, who acknowledges the irony of the family’s Christmas tree with the line, “Nice Chanukah bush.”

Adolph Freitag, played by Colton Pitstick, fears the conflict going on in Europe and talks about it with his bedding store employee, Joe Farkas, a plainspoken New York Jew played by Rory Papania. Joe falls in love with Adolph’s daughter, Sunny, a Wellesley graduate, played by Liana Rothman. When Joe realizes that his ethnic pride is a source of shame for Adolph’s sister Boo, played by Lydia Jewett, it’s Sunny who tries to unite the two sides of her Jewish community. Her line, (paraphrased) “Unfortunately, we’re Jewish on both sides all the way back,” helps the Freitags to face their undeniable heritage.

“I bridge the gap and help us come to terms and be proud of who we are,” Rothman said.

“The play is interesting because it talks about the conflict between Eastern and Western Jews, orthodox and non-orthodox Jews, and intra-religious conflict,” she said. “And the way it’s resolved is really beautiful.”

Several of the students in the show helped the Theater Arts board to select this year’s director, Ara Beal, who grew up in Yellow Springs and directed Bunnicula for YS Kids Playhouse in 2008. Currently living in town with her family and working on a PhD in theater history from the University of Maryland, Beal chose the show partly because she thought the students would relate to it.

“The issues these characters face are relevant to all youth, especially the juniors and seniors about to start their own lives and trying to figure out how much of what my family believes am I going take with me?” Beal said.

Both Bakari and Rothman, who are often called to play characters like old bearded men, have had a lot of fun playing young women about their age.

The students did a lot of what they called “table work” to talk about their characters and the historical context of the play, which Uhlry wrote in 1997, about a decade before his Tony award-winning play Driving Miss Daisy. Bakari likes the backstory she had to develop for her character, who, she decided most resembles a skunk. Bakari feels the details she knows about her character’s likes, dislikes and motivations allows her to play the part with greater authenticity.

“Because we know our characters so well, we’re all acting from a place of more spontaneity,” she said. “I feel like it will be a little different each night.”

Other characters in the Freitag family include Talia Boutis as Aunt Reba, Phillip Kellogg as the conductor, Lela Dewey and Ali Solomon as train riders, and Ballyhoo dancers Anna Knippling, Rachel Meyer and Joshua Seitz. Robbie Weigand is the stage manager, and Mary Triplett and Katie Triplett are the light designers. Moira Laughlin helped with costuming, Jerome Borchers and Eli Mulhall built the set, and Mulhall is also doing sound for the show.

Last Night of Ballyhoo opens this weekend and runs Nov. 11–13 and 18–20. Friday and Saturday shows begin at 8 p.m., and Sunday matinees begin at 2 p.m. The cast and director will host a “talk back” after the show at 10 p.m. on Nov. 19 to answer questions from the audience. Tickets are $5 for students and seniors; $9 for adults.