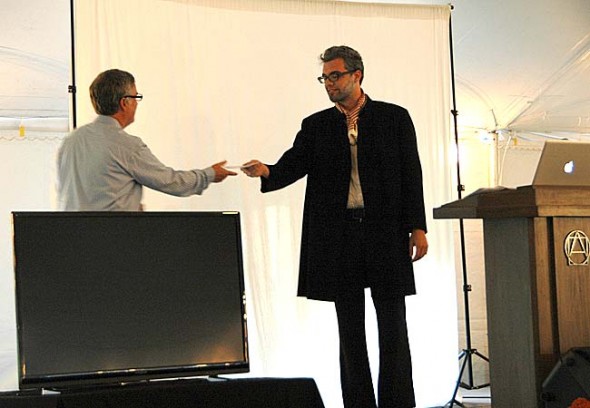 Antioch College has been successful in achieving candidacy status in its pursuit of accreditation, College President Mark Roosevelt announced to a standing ovation at the college’s Alumni Dinner on Saturday evening. Candidacy status is a critical step in the college’s rebirth that has taken several years to achieve, and that allows significant benefits, including students now being eligible for federal financial aid..

The announcement was made during a playful and festive presentation that included a surprise visit from the college’s first president, Horace Mann, who arrived at the event in a golf cart.

“If Antioch College can back from the dead, so can I,” Mann said.

The college had just received the accreditation news the previous day, Roosevelt said. And the Higher Learning Commission, which grants accreditation, also allowed the college to take the fast track to accreditation from here on out, on a two-year path rather than the traditional four-year process.