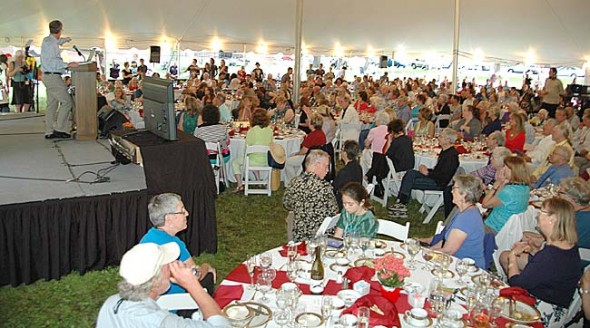 Antioch College President Mark Roosevelt announced to college alumni and community members that the college had just the day before been named by the Higher Learning Commission a candidate for accreditation, culminating a multi-year effort. Following the announcement, renowned college President Horace Mann came back from the dead in a golf cart to present Roosevelt with the good news from the HLC. (Photo by Matt Minde)

“When the college re-opened four years ago, many thought this day would never come,” Roosevelt said in a press release Monday. “But here we are, thanks to the leadership of our board, the hard work of our faculty and staff, the generous financial support of our alumni and the adventurous spirit of our students who took a leap of faith when they decided to join us.”

Specifically, Roosevelt announced to the crowd of several hundred at the Alumni Reunion dinner that the college just the day before was named a candidate for accreditation with the Higher Learning Commission, or HLC, the national accrediting body. Achieving candidacy status followed a multi-year effort and allows the college to take advantage of federal financial aid for students and also the opportunity to achieve full accreditation within two years.

“It’s kind of the whole shebang,” Roosevelt said in an interview Monday when asked the significance of the event. “It’s absolutely essential.”

Saturday night’s event, the capstone of the college’s annual alumni reunion, offered a large dose of playfulness and festivity along with talk of accreditation. Following the candidacy announcement, Roosevelt introduced a video purporting to show overly eager Antioch College students attempting to charm the HLC site review team (played by college faculty and staff) in a series of misguided efforts. And in the evening’s high point, the long-dead founding Antioch College President Horace Mann rode up in a golf cart, dusted himself off and presented Roosevelt with the letter from the HLC.

“If this college can come back from the dead, so can I,” Mann said.

Long process
When the college was closed by Antioch University in 2008, it lost its accreditation, which gives legitimacy to the school’s academic programs and degrees. College leaders began working toward obtaining new accreditation as soon as the college re-opened in 2009, Roosevelt said, and in 2011 submitted an almost 1,000 page (122 pages of narrative and 840 of documentation) Preliminary Information Form, or PIF, a required first step. However, the HLC rejected the college’s first effort, and that rejection reflected legitimate shortcomings, according to Roosevelt on Monday.

“We opened a year too early,” he said of the college’s decision to admit its first students in fall 2011. “The program was not developed enough, the curriculum not fully formed. To their credit, the accreditors saw that.”

After about a week spent deciding whether to keep moving forward, college leaders dug in and tried again. The second PIF, submitted in 2012, met with HLC approval.

The college was then allowed to complete a required “self-study,” on a fast-track of 14 months rather than the traditional two years. Following that, an HLC site team visited campus in November 2013, to evaluate the college’s readiness, then make a recommendation to HLC leaders. The success of the site visit is reflected in the HLC’s decision to allow the college to reach full accreditation status in two years rather than the traditional four, a decision that will make it easier for Antioch to attract new students.

“The site visit found that the college not only met the standards for candidacy but the standards for accreditation, which was very unusual,” Roosevelt said this week.
Roosevelt gives credit to Vice President for External Relations Jennifer Jolls for overseeing the successful candidacy effort, along with college staff and faculty, who worked hard on the effort on top of their normal teaching and committee duties.

Having candidacy status eases the burden of what Roosevelt describes as a “164-year-old start-up” in a number of ways. Most important, the college, which until now has had no access to federal funding for student loans, will now be able to offer Pell and other federal grants to financially needy students, providing a significant source of new income. While the college will continue to offer the full-tuition Horace Mann fellowships to incoming students this fall, the federal grants can be used to offset the cost of room and board. And beginning in fall 2015, the federal money can help cover tuition costs when the Horace Mann fellowships begin covering half tuition for incoming students.

Because the college has been allowed to take the two-year fast track, it could become fully accredited in June 2016, following a fall 2015 site visit. However, some of the college’s first class of students will graduate in 2015, receiving diplomas that aren’t from an accredited school. College leaders are fully cognizant of this timing gap, and plan to work closely with students to help them achieve their goals, Roosevelt said on Monday.

“We will be working with them individually,” he said. “A majority want to go on to graduate school and I’ll personally communicate the arduousness of what they’ve been asked to do. These students have proven themselves.”

Challenges remain
Looking toward reaching full accreditation, Roosevelt said Monday that he is confident the school will meet the necessary academic requirements. However, the main challenge to the college’s rebirth remains financial.

“The financial status of the college is the biggest obstacle for us,” he said.

At Saturday night’s reunion dinner, Roosevelt emphasized that this coming year is critical for Antioch fundraising. Along with the $15 million needed to operate the school annually, the college seeks to raise over the next five years about $60 million for campus renovation, including upgrading the science building, Main Hall and building a new dorm.
The accreditation success “puts a lot of attention on fundraising this year,” Roosevelt said at the reunion. “We need those who already give to double what they’ve done and reach out to those on the sidelines and say to them, ‘this is the time.’”