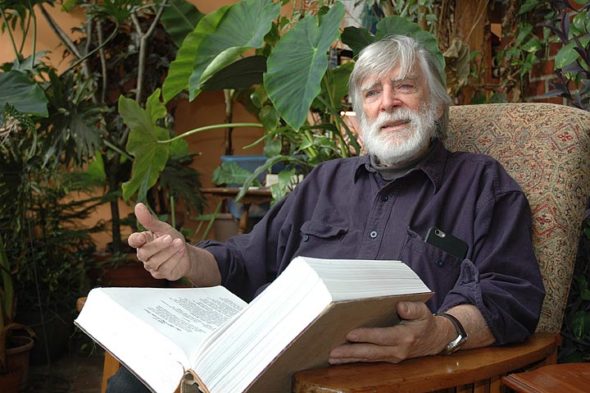 Local almanac writer Bill Felker recently published a new book, “Home Is the Prime Meridian,” a collection of nature essays drawn from his News columns and elsewhere. Pictured here in his greenhouse with a bound version of his daybook, Felker recalled how his wife’s gift of a barometer in 1972 got him started on observing weather patterns and other natural phenomena. (Photo by Audrey Hackett)

Camel crickets in the tub. Robinsong and its absence. A koi pond in winter. Hepatica, violet cress, bloodroot, Virginia bluebells. The “iconography” of light on a wall. Memories of adolescent devotion in a Catholic seminary.

All of these subjects illuminate local almanac writer Bill Felker’s new book, “Home Is the Prime Meridian,” self-published through Amazon in November and available through that online retailer and locally at Village Artisans and the Yellow Springs News. The book features 40 brief lyric essays culled from the thousands of nature columns and almanac pieces he’s written over the years, including for this newspaper.

While Felker has been publishing his annual almanacs in book form since 2003, “Home” is his first essay collection. He was impelled to create the volume after the death of his wife, Jeanie, in 2012.

“I felt a tremendous urge to wrap things up in my head,” Felker said in a recent interview at his South High Street home.

Friends and family helped him winnow his storehouse of essays, reading and weighing many tens of thousands of words. Felker made final selections for the slim volume, guided by what moved him most.

“You gotta feel it,” he explained, tapping his hand to his heart.

Felker didn’t set out to craft a book around the theme of home. But home is a natural subject for an almanac writer with a philosophic and poetic bent, who is always searching to locate not just the markers of the seasons — wildflowers, birds, celestial events — but the markers of himself.

“My natural tendency is not to be a naturalist or scientist,” he said. “All of these flowers are pieces I’ve gathered around myself to define who I was and am becoming.”

Felker, 77, grew up in Minnesota and Wisconsin. He spent four years in a Catholic seminary as a teen, experiencing a deep sense of belonging there. “I really did feel like I was called, chosen,” he said. But another call proved stronger — the call of the natural world.

“The hills were green and gold in the sun, and I longed only for the open river and the magic of earth,” he writes in the essay “Conversion,” included in his new book.

After travels and a stint in the Army, Felker earned his bachelor’s and master’s in Spanish from the University of Minnesota. He got married and had a child, Jeni. When he and his wife divorced, Felker and his young daughter moved to Illinois, where he met his second wife, Jeanie.

The family then relocated to Knoxville, where Felker pursued doctoral studies in Spanish at the University of Tennessee, focusing on the influence of the land in Latin American novels. In 1972, hoping to help him combat graduate school stress, Jeanie gave him a simple gift: a barometer.

“It became not only an escape from intense academic work, but the first step on the road to a different kind of awareness about the world,” Felker writes on his website, describing how his almanac began.

He started graphing the weather, marveling at the regular appearance of cold fronts throughout the year and the beauty of that rendering on the page.

“I still have those graphs,” he said.

He earned his doctorate and went on to a long and satisfying teaching career, but his personal interests had shifted irrevocably to the natural world.

“I became more interested in the land. I wanted to know what was happening,” he said.

In 1978, Felker and his family made a life-changing move. He got a teaching job at Central State University, and the family relocated from a previous teaching post in North Carolina to Yellow Springs, drawn by the town’s progressive reputation. He and his wife hoped their second daughter, Neysa, adopted from Korea, would find an atmosphere of greater tolerance and acceptance here.

Felker said he felt a sense of connection to the local landscape almost immediately.

“It’s become home. I’ve lived here more than half my life,” he said.

He continued to chart the weather, and by 1981 was keeping a detailed daybook of a range of natural phenomena. A bound version of that book covering the years 1981 to 2003, thick as a volume of the Oxford English Dictionary, remains a reliable reference and companion.

He got his start writing a weekly almanac column in 1984. Don Wallis, then editor of the Yellow Springs News, offered him a spot in the paper.

“Don said, ‘If you do this, you have to do it every week,’” Felker recalled.

And he has. About 15 regional and national newspapers now carry a version of “Poor Will’s Almanack.” Some versions are more farm-focused; the News version has evolved in a more personal, contemplative direction.

In 1995, villager Al Denman suggested that Felker present his almanac on the radio. Local NPR affiliate WYSO was receptive, and Felker has hosted an almanac show on that station for over 20 years.

Finding material for his newspaper and radio pieces is rarely a problem.

“Things keep coming to me all the time. Sometimes I don’t know what I want to write about — then it’s just there,” he said.

Hikes in the Glen used to inform many of his observations, but quiet time in his house and yard have become equally important. From an armchair in his main room, a favorite writing spot, he can watch bird traffic at his feeders. Sparrows, juncos, chickadees, a cardinal pair. And on the morning of our interview — a hawk.

“That’s very rare,” Felker exclaimed of the fierce visitor, a red-tailed hawk, hanging out so near the house on a low branch.

Five, 10, 20 minutes passed. The hawk remained. Finally, out of the corner of our eyes, we saw a froth of wings near the ground. The hawk was wresting something small and dark from the patchy snow.

It was a small moment, easy to miss. Or full of meaning.

Home and self are constellations of such moments, according to Felker.

“We’re all pieces of what’s around us. It’s obvious, but we forget. We keep thinking we’re above it,” he said.

For Felker, the wildflowers, birdsong, weather patterns and celestial movements that define this patch of earth also define his deepest sense of himself.

In the new book’s title essay, he writes, “When I go too far out, I need to gather my landmarks of home around me. Distant locations only make sense against my local gauge.”

Although one daughter now lives in Portland, Ore., and the other in Italy, Felker remains here. Yellow Springs has been his “local gauge” for nearly 40 years. And for almost that long, his writing has been a essential weekly gauge for area readers and listeners.

Yet Felker has far from exhausted his practice of gathering landmarks. In the book’s penultimate essay, he inventories the contents of his wintertime alley. Enumerating everything from fallen Osage fruits to brittle lily stems, he concludes, “And I have not begun to see.”