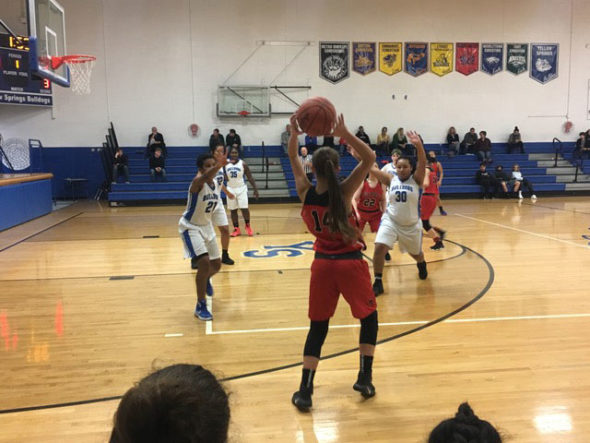 Girls varsity basketball
Despite disappointing losses to both Northeastern (63–55) and Springfield (88–21), the Lady Bulldogs are on a two-game win streak. The girls won a nail-biter against West Carrollton last week. Leading the way was Amani Wagner with 21 points and 17 rebounds. Gracie Price contributed 10 assists, most of which went to Wagner. Dede Cheatom had 14 points and nine rebounds, and the size of the Bulldogs was too much for sharpshooting West Carrollton to overcome. Despite Wagner struggling from the line, she hit the game-winning free throw with nine seconds left to seal the Bulldogs win. The Bulldogs won 48–47.

In the following game against Jefferson, the girls picked up an important conference win. Stifling defense was the key to this game as the Bulldogs held Jefferson to just seven first-half points. The rebounding was also impressive, as the girls racked up 67 total rebounds — 40 of them offensive — and Cheatom had 19 boards. The Bulldogs were led in scoring by Wagner, who scored 12 points and contributed 14 rebounds. Ayanna Madison gave the Bulldogs 11 points. Annlyn Foster had her first career varsity points as she scored four in the fourth to finish off Jefferson 46–24. The Lady Bulldogs are 2–2. They play next on Dec. 7 at Middletown Christian.

Boys varsity basketball
The boys lost their first game against Stivers 81–50. A strong Stivers team pressured the ball well and forced the Bulldogs into 27 turnovers. Andrew Clark had 13 points and three assists for the Bulldogs. Tony Marinelli had 15 points and two blocks. James Browning had 14 points and seven rebounds. The Bulldogs hung with Stivers in the second and third quarters but a rough first quarter and a similar fourth put the Bulldogs away. The Bulldogs are 0–1. They play next away against Middletown Christian on Dec. 8.

High School Bowling
The Bulldogs lost both their first meets. They lost against Middletown Christian, 2434–1597. They also lost against Miami Valley 1664–1502.