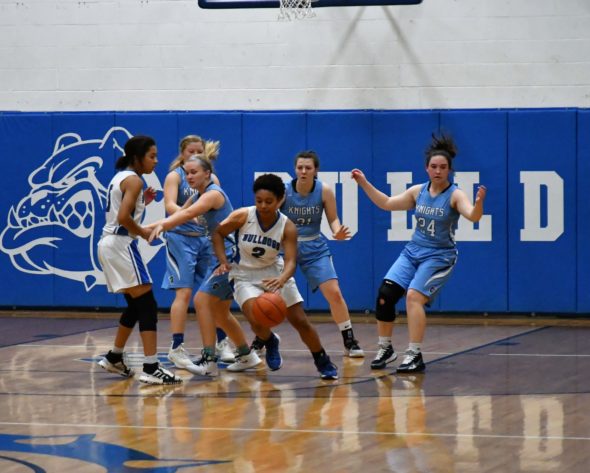 Annlyn Foster dribbled out of traffic while teammate Angie Smith worked to get open during the YSHS girls varsity basketball game against visiting Legacy Christian on Monday, Dec. 30. The Bulldogs were overwhelmed 67–22 and fell to 7–2 on the season. (Photo by Kathleen Galarza)

The girls varsity team secured two more wins on the road as the Bulldogs headed into the winter break.

In an away game Friday, Dec. 20, the team finished 41–35 against Dayton Christian.

Angie Smith was the game’s high scorer, with 28 points, along with nine rebounds and four steals.

The game was close until the end. After the Rams took a three-point lead late in the fourth quarter, Yellow Springs responded with a 9–0 run to win.

After playing the late Friday night game against Dayton Christian, the Bulldogs had to be back on the bus at 10 a.m. Saturday morning, Dec. 21, for a game in Ansonia, Principal Jack Hatert’s alma mater.

The Bulldogs came out flat, and Ansonia made a season-high eight three pointers.

Yellow Springs was down 15 points with five minutes left in the game, but they made a great comeback to put the game into overtime and win 39–37.

Smith again led the team in scoring, with 27 points for the game, as well as nine rebounds and five steals.

Foster and Haneefah Jones had 10 rebounds each.

The Bulldogs are now 7–1 for the season and 4–1 in conference play. The standings represent one of the best season starts the girls team has had in recent history.

The boys varsity squad lost 45–21 in an away game against Dayton Christian on Friday, Dec. 20, and fell 63–39 in nonconference play at home Saturday, Dec. 28.

With the school on winter break for two weeks, the score from the Saturday, Dec. 21, game against Northeastern was not available.