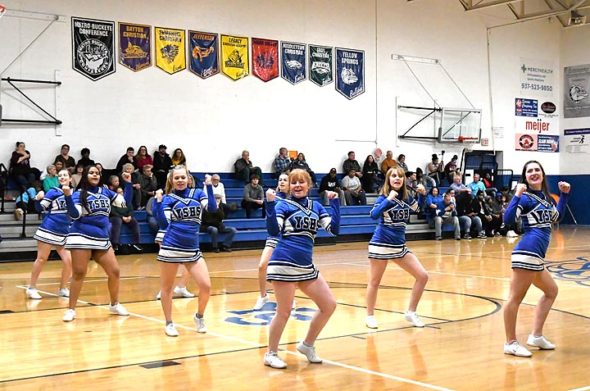 It was a tale of two halves. The Bulldogs scored 13 in the first half of the game and finished strong with 26 in the second half.

As a team, they are having great halves and just need to put together two halves in the same game.

Sophomore Deandre Cowen led the way with 26 points and 11 rebounds for a quality double double.

Freshman Eli Eyrich and sophomore Cameron Harris both contributed with five points apiece. Eyrich also had a team high of four assists. Cowen and Eyrich combined for 12 turnovers of the team’s 24, mostly in the first half. Next up are Troy Christian on Monday, Jan. 6, at their place, and Jefferson on Friday, Jan. 10, at home.

After a disappointing home loss against Legacy Christian on Monday, Dec. 30, the girls varsity basketball team picked up two wins with the start of the new year, defeating East Dayton Christian on Thursday, Jan. 2, and Northridge on Saturday, Jan. 4, both on the road.

The Dec. 30 game against Legacy Christian ended with a score of 67–22. The top Bulldog scorer was Angie Smith, with 13 points and eight rebounds. Annlyn Foster also grabbed eight rebounds.

The final score against East Dayton Christian was 60–43, with Smith scoring nearly as many points as the opposing team’s total. Her 40 points for the game was a career high for the sophomore. She also had eight steals for the game.

Other game statistics: Foster had nine points and 10 rebounds; and Haneefah Jones got 11 rebounds.

The Jan. 4 game against Northridge ended 44–28 in the Bulldogs’ favor, with Smith earning 16 points and eight rebounds.

Also helping to secure the win were Aaliyah Longshaw, with 10 points and 10 rebounds; Corinne Totty, with eight points and seven rebounds; Jones, with nine rebounds; and Foster, with 12 rebounds.

The Bulldogs are now 9–2 for the season, and 4–2 in the conference, representing one of the best starts the girls’ squad has had in recent history.

Standout player Smith has also been selected by Jim Dabbelt for the Bill Moss Underclassmen All Star Game in March, which features the top girls basketball players in the Miami Valley.

The McKinney Middle School boys basketball teams traveled to Emmanuel Christian before the Christmas holiday and then to Legacy Christian after the holiday. Although both grade levels suffered losses it was obvious that both teams are improving in their overall play.

The eighth-grade team suffered a close loss to Emmanuel Christian on Monday, Dec. 16, with an outstanding fourth-quarter effort to come back, but the boys fell short by one point, to lose 27–26.

The seventh-grade McKinney Bulldogs also took a loss Dec. 16, with a 30–22 score. The boys were led by Landon Harris with nine points and Kaveeyon Wagner with seven points for the evening. Alex VanAusdal added four points to the game, followed by Mateen Sajabi, who added two points.

The Middle School Bulldogs traveled to Legacy Christian on Dec. 30 to see the Knights for the second time this season. Although both teams suffered another loss, the players are improving and made each game more competitive. The eighth-grade team lost 40–22 but kept the game closer than their previous match up with the Knights.

Grushon led the eighth graders with eight points, while Miller and Wagner added four points each. Ortiz-Thornton, Baker and Isiah Search added two points to the total as well.

The seventh-grade team tried to even their record with Legacy after being dealt a close loss to the Knights in their first game of the season. The seventh-grade Bulldogs played strong defense led by VanAusdal, Terrel Robinson and Harris, but fell two points short in the final seconds to lose the battle 28–26.

Five players scored on the night with a game high 15 points by Harris, VanAusdal, Wagner and Lucas Price added three points each. Terrel Robinson also added to the offense with two points.