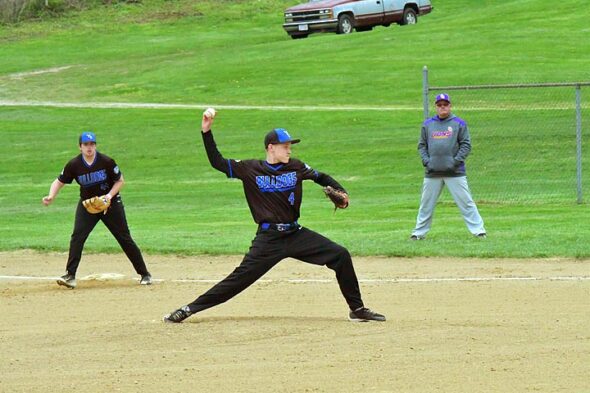 Josh Clark pitched a zinger at an April 15 match-up against Emmanuel Christian. Shawn Vanhoose stood at the ready on first base. (Photo by Kathleen Galarza)

Sending a smaller than usual number of athletes to the rainy Greeneview Invitational last Wednesday, April 28, did not deter the Bulldogs from setting season best marks in a variety of events. The girls team finished in fourth place. Sophomore distance ace Cheyan Sundell-Turner pulled off a distance double victory in the 1,600 and 3,200 meter runs. She avenged early season losses to two of her opponents in the 1,600 with a furious sprint at the end of the race that resulted in a season-defining win. Junior Malaya Booth sprinted to runner-up finishes in the 100 and 200 meters as she begins to round into shape.

The boys squad was led by Junior Malik Thomas, who had a season-best performance in the long jump (17´8´), which earned him a second-place finish. He also sprinted to fifth place in the 200 meters.  Senior Griffin Roberts hurdled his way to a fourth place in the 300 hurdles. The distance squad of Malik Booth, Gideon Naziri and Rilo Oberg all ran personal best times in the 1,600, while Booth and Naziri also ran personal bests in the 800 meters. Sophomore Sven Meister performed admirably in the discus and shot put. The boys finished in fifth place.

Coaches Isabelle Dierauer and John Gudgel are excited for the annual Bulldog Invitational, which will take place on May 7 at Greeneview High School, where the Bulldogs will entertain 12 teams. The league meet will be on May 15 at Cedarville University.

The week began with the Bulldogs hosting Tri-Village on Monday, April 26, at Gaunt Park. Freshman Isaac Grushon started for the fifth time in his young career. He struck out two and walked only one, but the defense did not provide the needed support to hold down the Patriots. Sam Miller came in to toss three strong innings of relief, striking out four, walking one and giving up only one earned run. Hard-hitting Tri-Village won by a final tally of 14–3, as baserunners were hard to come by against their strong pitching. Josh Clark had a walk, a beautiful sacrifice bunt and an RBI. Blaine Baker added a hit, run and an RBI of his own. Ben Espinosa saw some playing time after having to sit out several games due to injury. He had a walk and came around to score. Shawn VanHoose had a hit, run and an RBI to add to the box score while continuing to play a solid first base.

The schedule listed an away game on Wednesday at Troy Christian. Although the forecast called for nasty weather later in the day, the hometown team loaded up the bus and wheeled up I-75 to meet their Metro Buckeye Conference foes. The prognosticators were on the money, but the game got started and had some early excitement.

The Bulldogs surprised the Eagles and their fans by tying up the game in the second inning before the deluge of rain hit. By the time the umpires suspended the game, the score was 2–2 and the bases were loaded with dangerous number-three hitter freshman Isaac Grushon, at the plate. The umpires called time before Grushon had a chance to see a pitch. Both teams manned the massive tarp to cover the field, in an attempt to make sure it remained playable. The umpires finally suspended the game, which was to be resumed on Friday.

Friday arrived and so did the team from Yellow Springs, excited and ready to finish what they started.  Grushon strode to the plate with lumber in his hands and fire in his eyes. The Eagles hurler could not find the plate with the first two pitches as Grushon dug in at the batter’s box and awaited eagerly. The third pitch found the strike zone and was to Grushon’s liking. He had a mighty swing and put the ball in play, but it was fielded well, dashing the chances for a big inning.

The rest of the game seemed to go just the same, with hard hit after hard hit finding the defense in the right spot. Eli Eyrich, Jake Ortiz-Thornton and Shawn VanHoose all had hits, but the scoreboard did not reflect other hard-hit balls by Grushon and two to the outfield by Sam Miller. The final score was 11–2, but the game was much closer than the final score seemed to indicate. The Bulldogs had runners on base in every inning but great defense by the Eagles kept the Bulldogs from any additional runs.

Krishan Miller showed determination and perseverance as he battled the first-place Eagles every inning. Pitching Coach Sam Jacobs commented, “It’s a sign of a really good pitcher that can battle like that when they don’t have their best stuff.” Miller pitched another complete game and added three strikeouts to his total of 25 for the year.

The opposing coach, the opposing athletic director and the home plate umpire all stopped Bulldog Head Coach Mitch Clark after the game to comment on how much the Bulldogs have improved.

“It was nice to hear, since development is our real focus,” Clark said. “The wins will come as long as we continue to focus our efforts on development.”

This is the last week of the regular season, and the schedule called for the Bulldogs to host Middletown Christian on Tuesday, May 4, for the last home game of the year. The home team then traveled to Trotwood-Madison on Wednesday, May 5, to make up the game that was bumped by the suspended Troy Christian game. Thursday, May 6, calls for a 5:30 p.m. rematch with Middletown Christian at their place. The Sectional tournament is scheduled to start Monday, May 17, with the drawing meeting on tap for Sunday, May 9.

Last week was Senior Night for the Yellow Springs softball team as they hosted Stivers at Gaunt Park. Seniors Bre Wallace, Hailey Burk and Natalie Galarza were showered with gifts and pictures in a pregame ceremony. Once the game began, the Bulldogs fell behind by a score of 11–3 at the top of the second inning, but responded with a six-run streak before the rains came. Wallace contributed two hits, scored two runs, and had three RBIs before the game was suspended with Yellow Springs still at bat and the tying run on second base.

“Tonight we continued our pattern this year of getting behind early and then relying on our offense to out-hit our opponents,” Coach Jim DeLong said, adding, “This team continues to score a lot of runs, and it was nice to see Wallace get two hits and knock in three runs on Senior Night.”

The Bulldogs’ next game had them traveling to Trotwood-Madison for a Friday night contest, and junior Sophie Lawson was a one-person swat team as she drove in five runs, in part thanks to an inside-the-park homerun blast that short-hopped the fence. She also had two singles, three stolen bases and scored four runs in an exciting 25–24 loss at Trotwood.

“Lawson is the smallest girl on the team, but it doesn’t matter,” the coach said. “When she connected on her inside-the-park homerun, the ball just exploded off her bat. I thought it was going to clear the fence.”

The Bulldogs were losing by six runs when they came back to take a three-run lead in the last inning, but they couldn’t hold on as Trotwood scored the winning run with two outs.

“It was a tough loss, but I told the girls I was proud of them for coming back in the last inning to take the lead,” DeLong said.

Hitting stars were Lily Rainey, who had three hits and scored three runs; Wallace, who almost hit for the “cycle,” as she had a single, double and triple, and four runs batted in; and freshman Violet Babb, who continued her onslaught at the plate with a double, two singles, a walk and four runs scored, to go with four RBIs.

The Yellow Springs softball team drew 17-seeded Botkins in the Sectional Tournament drawing this past week. The game will be played 5 p.m. Tuesday, May 11, at Botkins. Botkins’ record for the season is 2–13.

Coach DeLong commented: “We got a little better seed than I expected, which enabled us to avoid playing one of the top seeds in the tournament. I’m not familiar with Botkins so they may be better than their record, but this appears to be a winnable game.”