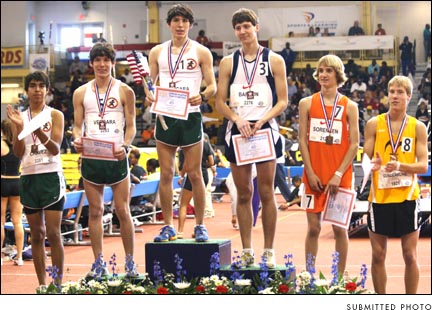 Two Yellow Springs athletes earned honors over the past two weekends at the national championships for their schools.

This past weekend Yellow Springs High School junior Jake GunderKline finished sixth overall out of the 11 finalists in the one-mile race walk at the Nike High School Indoor National Track and Field Championships in Landover, Md. GunderKline, one of YSHS’s top distance runners, ran a lifetime best of 7:16.29, an improvement of nearly 14 seconds over his previous best time. GunderKline went out fast, and managed to outlast Maine’s Tyler Campbell down the home stretch of the eight-lap race. Texas senior Ricardo Vergara won in 6:34.98.

This is Peters’s third national collegiate title for Goshen College as she also won the NAIA Outdoor Track & Field Championships last May in Fresno, Calif.