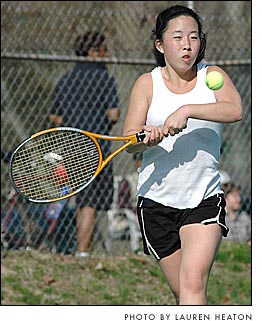 Olivia Chen made short work of the first singles match against Cedarville on Monday, April 7, and took the first of four matches Yellow Springs won to seize the day against the Indians.

Against Cedarville, Olivia Chen didn’t drop a game at first singles, while Alex Turner won 6–2,4–6,6–4 at second singles. Hardman dropped only two games to win his third singles match. The first doubles team of Amy Dibenedetto and Julika Ruf won 6–3,4–6,6–1, and the second doubles team of Francesco Amighetti and Max Buchwalder pulled out a 7–6,6–1 win.

Against Waynesville Chen went under without winning a game on the first court, while Turner managed to go three sets before the bad news of 6–3,6–7,6–3 sealed his loss.

Against Northridge, Chen, Turner and Hardman bowled over the singles competition, while Amighetti and Buchwalder struggled through a 6–3,3–6,6–4 win. Dibenedetto and Ruf suffered the day’s only loss 7–6 (7–5), 6–2.

Tennis Coach Joshua Mabra is leading the team for the first time. He was a three-time all Ohio All-State tennis champion (twice finishing third in the state in doubles) and a three-time NCAA Division III National Competitor at Kenyon College. Mabra was also the British Universities Sports Association National Champion 2007 at the School of Oriental and African Studies, University of London.

Depleted by the absence of 10 runners, the YSHS boys track team finished fourth out of eight teams at the Old Kenton Trace Conference on Friday, April 18. Waynesville was first with 103 points, followed by Greeneview with 89, Madison Plains with 76 and the Bulldogs with 73. The Yellow Springs girls team finished fifth out of eight teams, the highest place the girls have ever achieved at this meet. Greeneview was first with 138.5 points; the Lady Bulldogs had 40.

Pettiford finished third in the 400-meter dash in 54.2, while the team of Ron Cobb, Ryan Newsome, Raphael Allen and Robert Harden took third in both the 400 relay (47.1) and the 800 relay (1:38.4). Erik Bean, Nathan Auten, Gabe Amrhein and Josh Meadows finished sixth in the 3200 relay, and solid effort was also turned in by Austin Bailey.

At London the boys distance team performed a preview of what was to come at KTC. The 3200-relay team of Nick Sontag, Pettiford, Onfroy and Jacob GunderKline took first place, as did Peters in the mile and the two mile, Onfroy in the 800 and Pettiford in the 400.

For the girls at London, Gonder finished first in the 400.

The weather warmed up last week and the Bulldogs won a big one against Xenia Christian 14–4 on Wednesday, April 16, but not before taking two losses to Middletown Christian 6–5 on Tuesday, April 15, and again against Cedarville 11–3 the following day. At the Northridge Invitational tournament on Saturday, April 19, Yellow Springs played admirably but lost 6–0 against a formidable Division I Oakwood team and then came back to beat Trotwood Madison 14–2.

With Ethan Brown pitching against Middletown, the Bulldogs fell back 1–0 but in the bottom of the first Todd Sheets tripled and then scored on Andrew Ferguson’s perfect bunt to tie the score. The Eagles rallied in the third for a run, but a double play choked off the threat. In the fourth hits by Brown, Kevin Sikes-Gilbert, and shots put Yellow Springs up 3–2. Shaky fielding led to three runs and a 5–4 Eagle lead in the sixth. Once again Sheets led off with a single and scored on a Ben Armstrong triple to tie it at 5. Middletown iced the win with a double and single in the seventh.

Against Cedarville Cory Daniels made the first start of his career. He had a shaky start hitting the first batter and giving up four runs in the opening frame after the ’Dogs had scored two on Jon Haller. Later in the game Andrew Ferguson would score on a Ben Armstrong hit.

The Bulldogs came out with heavy hitting against Xenia Christian. On hits by Sheets, Sikes-Gilbert, Armstrong and Brown, the Bulldogs scored 3 first-inning runs on the way to a win in six innings. Haller and Jamie Kitzmiller helped out with two hits each. Sheets was the winning pitcher.

The Oakwood Lumberjacks were clearly the stronger, bigger team, and though the Bulldogs gave it their all, including getting two double plays, they trailed 6–0 after five innings. Unfazed by the competition, the ’Dogs pounced on the Trotwood Rams for a win under Kilan Brown’s pitching and a two-hitter that drove in three runs.