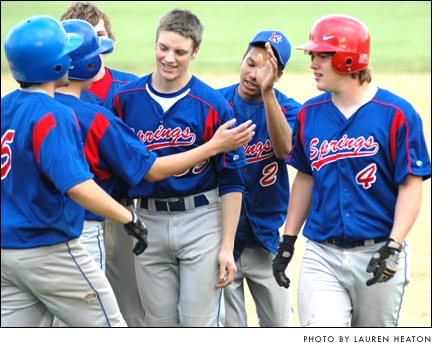 Rain hampered much of the Bulldog baseball team’s late-season games last week, but allowed Yellow Springs a 7–6 win against Troy Christian on Monday, May 5, to make up for a 5–0 loss to the same team the preceding Thursday, May 1. Friday’s game against Middletown Christian was rained out. The Bulldogs are 7–7 and 4–4 in the league. Troy falls to 8–2 in the league.

On Thursday against Troy, the leaders of the Metro Buckeye Conference, the Eagles jumped out to a 1–0 lead on Todd Sheets with a double and a triple in the first. The Eagles added another run in the fifth and then 3 in the sixth. Meanwhile, the Bulldogs hit the pitching of the Troy pitcher, but it was always right at an opponent. Sheets pitched very well, and only gave up six hits while walking two and striking out six.

Against Troy on Monday the players used wooden bats, not the modern metal. In a game one Bulldog called “not so pretty,” the Eagles sent Welden back to the mound, while Yellow Springs countered with Ethan Brown. Brown gave up a lead-off double, then retired the side in the first. The ’Dogs again hit the ball well, again right at the opponents, but this time the Eagles had major fielding problems. The Eagles were up 4–2 in the second when the ’Dogs stormed right back with a couple of walks, a Sheets triple and a Troy error to go ahead 6–4.

With the game tied at 6 in the fifth, Brown calmly retired seven straight batters in the last frames. In the bottom of the seventh, Ben Armstrong and Jonathan Haller both had hits to get on base before pinch hitter Cory Daniels was walked to load the bases with one out. Kevin Sikes-Gilbert popped out, and with the crowd on the edge of their seats, the count on Jamie Kitzmiller went to 2–2. Then Troy pitcher Kiefer, who had come in during the third inning, reared back and fired a fastball into Kitzmiller’s arm to allow the winning run to score. Todd Sheets had three hits to raise his average to .432. Brown got a well-earned victory, giving up only one earned run. (See photos of the gme on page 12.)

Yellow Springs softballers played just one game last week against league leader Troy Christian, and had the last inning gone differently, they might have won. The Lady Bulldogs’ 14–5 loss does not accurately reflect what really went down on Thursday, May 1.

It was the best the Lady Bulldogs have played all year, according to Coach Jake Fulton. Lauren Miles pitched a solid first six innings, and coupled with an unbreachable Alex Beer at shortstop and Bailey Linse at keen attention at third base, the team appeared unstoppable. Danielle Fulton caught a pop fly, and Taylor Ennis singled for an RBI and played strong left field to put Yellow Springs up 5–3 at the top of the sixth. But perhaps not used to being in the lead, at that point Yellow Springs fell apart.

With Bulldog base runners on first and second, the shortstop from Troy made a diving catch for the Eagles’ second out, and threw the ball from her knees to first base for an unlikely double play. The move changed the game’s momentum, and the Eagles came out to score 10 runs that inning.

Last week’s game against Middletown was rained out, and the game against Northridge was cancelled. Jefferson forfeited last Tuesday’s game to the Bulldogs.

The Lady Bulldogs travel to play the number three seed Covington (at Covington) on Tuesday, May 6, at 5 p.m.

The YSHS tennis team put two more 5–0 wins under its belt last week against Miami Valley’s B team on Wednesday, April 30, and Dayton Christian on Monday, May 5. The team’s record is an impressive 13–1, with third singles player Zeke Hardman still undefeated in 14 matches this season.

Against Miami Valley, first singles Olivia Chen couldn’t even make a story out of her straight set win, and Hardman made short work of his victory on the third court as well. Alex Turner won his first set handily, and just pulled off the second in a 7–3 tie-breaker. At first doubles, Amy Dibenedetto and Julika Ruf won 3–6,7–6,6–1, followed by second doubles Francesco Amighetti and Max Buchwalder who won 7–5,6–2.

Against Dayton Christian, Hardman had no trouble moving up to first singles and wiping out the competition 6–2,6–3, while Ruf got similar results trying her hand at second singles and winning 6–4,6–2. At third singles, Amighetti took the first set to get acclimated to a smaller court and more running, but he had it in the bag by the second set, choking off his opponent 6–0. Chen paired up with Dibenedetto at first doubles, while Amighetti and Turner took on second doubles, and both courts went on to swift victories.

Chen and Turner are seeded first in the Division II Troy sectional tournament, which starts on Wednesday, May 14, at Troy High School.