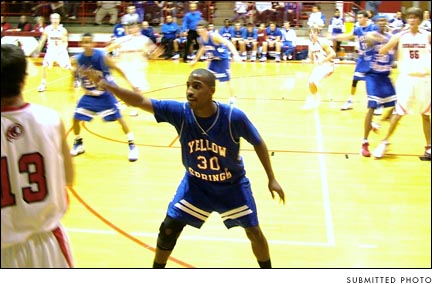 YSHS boys basketball senior Raphael Allen put up 10 points and five steals against Cedarville on Saturday, Jan. 17, to help the Bulldogs toward a 54–43 victory, the team’s third straight win.

With just seven swimmers, the YSHS girls swim team placed fourth out of 10 teams at the County Invitational on Friday and Sunday, Jan. 16 and 18. The Lady Bulldogs won the 200-medley relay with Erika Chick, Maiya Hodge, Elizabeth Malone and Barbara Jewell in 2.06 minutes by five seconds. Then a slightly different team of Claire Triplett, Hodge, Elizabeth Malone and Chick managed to come from behind to out-touch Tippecanoe by half a second for the 200 free relay in 1:58.

Senior Zane Reichert, lone competitor for the boys team, placed fourth in the 100 backstroke and 10th in the 50 free.

The Bulldogs led Saturday’s game 16–13 through the first quarter and 220 at halftime. Ryan Newsome’s hot outside shooting got the ’Dogs out to an early lead. Chris Johnson and Raphael Allen were Yellow Springs’ rebounding machines. Allen led with nine rebounds and seven points for the game, and Johnson snatched down six rebounds and added three points. Kevin Sikes-Gilbert dished out five assists and dropped in 10 points. Ian Wimberly and Ryan Phillips provided solid play and both scored six points each.

The Bulldogs continued to lead 43–37 through three periods, but the Indians had cut the lead to just 2 points mid-way through the quarter. The Bulldogs tough defense limited Cedarville to six points in the fourth quarter. Timing baskets late in the game sealed the Bulldog victory.

The Bulldogs fully dominated the game against Miami Valley, as seen by their 43–16 halftime lead. The highlights occurred when Phillips threw down a fast break dunk in the first half, followed by Will Ripley’s dunk in the second half. Wimberly also dished out six assists and four steals.

For that game, Newsome was the high scorer with 21 points, followed by Allen with 10 points and five steals. Ripley had 10 points, while Kevin Sikes-Gilbert and Phillips had eight points each. Chris Johnson handed out four assists.