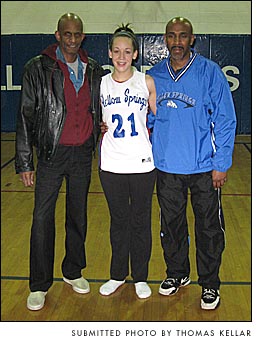 Yellow Springs High School senior Ashanta Robinson shot the 1,000th point of her basketball career during the home game against Belmont on Tuesday, Dec. 30. Robinson, flanked by her father Ron Robinson, left, and her coach Duncan Thomas, will be honored in a ceremony before the girls home game against Middletown Christian tonight, Thursday, Jan. 8.

The Yellow Springs High School girls basketball team had just one game at home on Tuesday, Dec. 30, over the holiday break, which went to Belmont 54–50.

This contest went to the wire. Yellow Springs lacked intensity in the first half and fell behind 23–11. But the Lady Bulldogs got it together in the second half with agressive man-to-man defense and managed to out-score Belmont in the third quarter, 23–12, to pull within 1 point at the end of that period. The fourth quarter was neck and neck until the last 30 seconds, when the Lady Bulldogs made some mental errors. With the score tied at 50, Yellow Springs lost the ball at half court, and Belmont scored on the turnover. The highlight for the Lady Bulldogs was senior guard Ashanta Robinson scoring her 1,000 career points in the contest. Robinson finished with 31 points, and Stephanie Scott led the team with 11 rebounds.

Yellow Springs started slow and lost a home game 80–58 on Saturday, Jan. 3, against Dayton Meadowdale, ranked fourth among Dayton Division I teams by the Dayton Daily News. Yellow Springs falls to 3–3 for the season.

The first quarter was a Lions blitz, as Meadowdale outscored the Bulldogs 28–9 with superior speed and agility. But true to form, the ’Dogs fought back to outscore Meadowdale in two of the next three periods to cut the Lions lead to 12.

Raphael Allen had 8 of his season high 15 points in the third quarter. Ryan Phillips broke out in the fourth quarter with 8 points, and Davone Freeman put up 5. Ryan Newsome lead the Bulldogs with 17, while Kevin Sikes-Gilbert added 9. Ian Wimberly and Joe Fugate chipped in two each.

The team honored the 1978 district champions at Saturday’s game. Find a recording of the ceremony at http://www.bulldogbasketball.net.

The McKinney School eighth-grade boys basketball team lost a hard fought battle 41–39 to Indian Valley on Monday, Jan. 5, making the Bulldogs’ season record 2–3 overall. The Bulldogs fell behind early but outscored Indian Valley 12–7 in the second quarter, ending the period with a half-court buzzer beater from lead scorer Roland Newsome, who shot a season high 34 points. Despite being in foul trouble, Levi Perry had a few key steals that kept the ’Dogs in the game, while Traven Halley’s rebounding helped spark the offense. The McKinney Bulldogs play Troy Christian at home on Saturday, Jan. 10, at 12:30 p.m.

The YSHS Bulldogs had a gutsy showing at the Kenton Ridge swim meet on Dec. 19. The girls team came in seventh place with 28 points out of 11 schools competing. Springfield Kenton Ridge was first with 126 and Bellefontaine was second. The YSHS boys team did not place, but Fairborn and Springfield finished first and second, respectively.

In individual events, freshman Elizabeth Malone won the 100 butterfly in 1:03.28, while Claire Triplett came in eighth. Hodge also finished 12th of 70 swimmers in the 50 yard free. She was joined by Doubt, Mary Triplett and Molly Turner in that event. Hodge then swam for eighth in the 100-yard breast, followed by Mary Triplett and Doubt.

Barbara Jewell and Claire Triplett finished ninth and 10th in the 100 backstroke. Jewell also swam the 100 free, while Erika Chick finished the 200 and 500 free.

For the boys, Zane Reichert swam the 50-yard free, and Sam Lovering swam the 100 free.