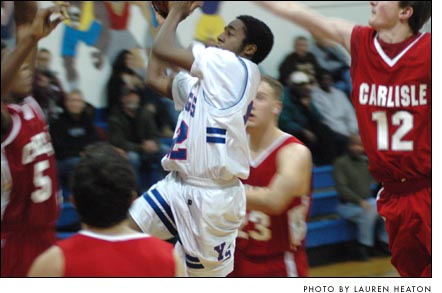 The Yellow Springs Bulldogs toppled Carlisle 86–61 to a home crowd on Saturday, Jan. 10. Asa Casenhiser capped the evening off with a layup in the last seconds of the game.

The YSHS boys basketball team lost to Middletown Christian 62–51 on Friday, Jan. 9, and then crushed Carlisle 86–61 the following night at home.

Against Middletown, the Bulldogs were jilted by an early run from the Eagles and a tough post by Kevin Gaynor, who scored 30 points in the game. Yellow Springs kept up in the second quarter, scoring 21 for Middletown’s 22, but couldn’t close the gap. Kevin Sikes-Gilbert was the team’s high scorer with 16, followed by Ryan Newsome with 12 and Raphael Allen with eight.

The next night, the Bulldogs outscored Carlisle in every quarter, chiefly in the third, when the team hit 22 to Carlisle’s 11. Carlisle took the lead early in the second quarter and scored often by sending full-court overhead passes behind the Bulldogs’ defensive press. But the advance was halted by two consecutive 3-pointers from Ryan Newsome and Devon Freeman and easy inside shooting from Sikes-Gilbert and Ryan Phillips, who put Yellow Springs up 41–32 at the halftime. The onslaught continued in the third, when two seconds before the end of that quarter, Newsome netted a 3-point shot (one of six for the evening) that put the Bulldogs up by 20 and set their sails for home.

The Lady Bulldogs started off strong in their first game of the year against Middletown Christian on Thursday, Jan. 8. But the win was not to be, and Yellow Springs went down 47–45.

Yellow Springs held a 12–8 lead at the end of the first quarter. But Middletown lit up in the second quarter, and the Bulldogs gave up eight turnovers to help them along. Then the Lady Eagles opened the third period with two straight 3-pointers and pulled away to finish the quarter up 42–25.

Yellow Springs, led by Ashanta Robinson’s 23 points for the game, helped the Lady Bulldogs close the gap. Robinson scored the first six points of the quarter on the strength of a 3-point play and a 3-pointer. She closed Middletown’s lead to just four with a minute left with a layup, then stole away the next possession and was fouled, hitting one out of two free throws. Robinson scored another two points to make it 46–44 Middletown with 40 seconds left in the game. The Eagles went up one more point, and then the Bulldogs’ Stephanie Scott scored a foul shot to make the score 47–45. Yellow Springs had one more chance to either tie or win the game, but the shot fell short.