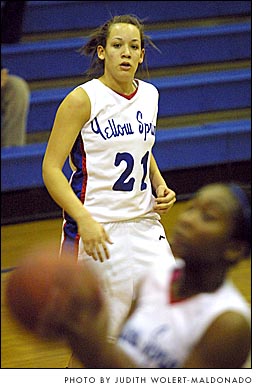 The YSHS girls basketball team won one and lost one Metro Buckeye Conference game last week as they rounded the bend toward the end of season tournament. The team will honor its seniors Ashanta Robinson, Jessica Keller, Kristen Foster and Melodie Wright with a pep band at their last season game at home at 3 p.m. on Valentine’s Day, Saturday, Feb. 14. (The game was originally scheduled for noon that day.)

The varsity boys team will have a make-up game the same night against Jefferson, giving the crowd a full day of basketball.

Yellow Springs fell to Troy Christian 54–33 on Monday, Feb. 2, riding a four game winning streak. But the Lady Bulldogs were denied the win. The Lady Eagles came out focused to go ahead 22–7 in the first quarter and hold Yellow Springs under double digits in two more quarters. Yellow Springs outscored Troy 13–8 in the third. Stephanie Scott led the team in scoring with 18 points, and Ashanta Robinson had a career low, five points in the defeat.

But Yellow Springs came back to slay Middletown Christian 56–44 on Thursday, Feb. 5. The teams shared control in the first half, with Scott scoring eight points in the first quarter to match the Eagles point for point and help her team to a 14–8 lead. Yellow was ahead 36–32 at the end of the third period. And then Ashanta Robinson put the team on her back in the fourth quarter by outscoring Middletown Christian by herself. Ashanta, 15; Middletown, 12. Robinson had a double double with 28 points and 16 rebounds, and Stephanie Scott had a double double with 22 points and 10 rebounds.

The YSHS boys basketball team lost to Middletown Christian 58–51 on Friday, Feb. 6. Kevin Sikes-Gilbert was the high scorer with 10 points, while Ian Wimberly and Raphael Allen each scored eight.

Both McKinney School girls basketball teams won their tournament games on Tuesday, Feb. 10, and will play next on Saturday, Feb. 16, at Middletown Christian in Middletown.