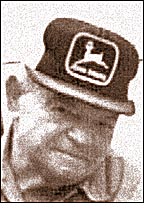 Eugene F. Pitstick of Cedarville passed away Tuesday, April 21, at Greene Memorial Hospital. He was 84. Eugene was born January 18, 1925, on the family farm outside Fairborn, a son of Paul and Marie (Heider) Pitstick.

Eugene was a loving father and grandfather and a lifelong member of St. Paul Catholic Church in Yellow Springs. He enjoyed hunting, fishing, gardening and traveling with his trailer. He loved warm weather and wintered in Florida during at least 30 years. Eugene was state pole vault champion from Fairborn Osborn Bath High School in 1944.

A mass of Christian burial was held on April 27 in St. Paul Catholic Church in Yellow Springs, with Pastor Anthony Geraci officiating.

Interment was in the St. Paul Catholic cemetery. In lieu of flowers, contributions may be made to the Dayton Diabetes Association, 2555 S Dixie Dr. Moraine, OH 45409, or the American Heart Association Miami Valley Division, 1313 W. Dorothy Lane, Kettering, OH 45409. Condolences may be sent to the family at http://www.jacksonlytle.com.