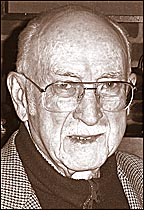 Dr. Harry M. Berley died at the Yellow Springs Friends Care Assisted Living unit on Friday, April 24. He was 91. Born in Cambridge, Mass., on December 14, 1917, he was the son of the late Hyman and Anna Budin Berley. Raised in Kingston, Pa., he was a graduate of Antioch College and Northwestern University Medical School.

Harry did his internship and residency at Miami Valley Hospital in Dayton. In 1945, the U.S. Army Medical Corps assigned him to Elk City, Okla. and then to Nuremberg, Germany, where he was joined by his wife and two oldest children. After his return from Germany in 1947, he worked for the VA for one year before establishing a general practice in 1948 in Yellow Springs. In 1956, he and Carl Hyde combined their individual practices and founded Community Physicians, moving into the current Community Physicians building at 1425 Xenia Avenue, where Harry worked until his retirement in 1986. He served as president of the Greene County Medical Society in 1955 and president of the Clark County Medical Society in 1977. He also served as president of the Delta Chapter of the Ohio Academy of Family Practice and as assistant clinical professor of Family Practice at Wright State University’s Medical School.

Harry met his wife, Thelma Fletcher, a Yellow Springs native, when they were both students at Antioch College in 1937. He would always say that he knew she was the only one for him from the moment he met her. They were married on December 1, 1938 and, in 1949, built their family home at 1201 Livermore Street, where they raised their three children. They continued to reside there until September, 2008, when they moved into the Friends Care Community.

A memorial service will be held on Friday, May 1, at 2 p.m. at the Friends Care Community Assisted Living Unit. In lieu of flowers, the family requests that memorial contributions be sent to the Yellow Springs Community Foundation or to a charity of one’s choice. Condolences may be sent to the family at 170 East Herman Street, Unit 1, Yellow Springs, OH 45387 or at http://www.jacksonlytle.com.