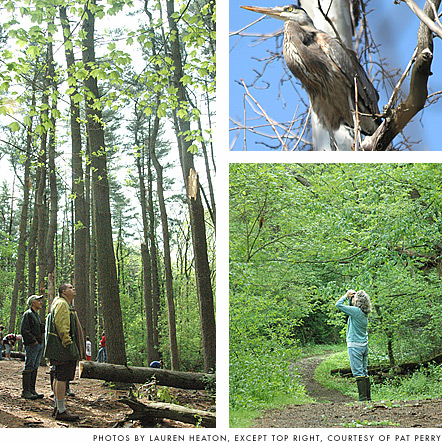 On a day with lots of wind, birding experts and watchers counting species for the third Make It Count for the Birds event in the Glen on Saturday, May 9, surpassed last year’s data by one. The group charted a total of 89 species of birds, including one Tennessee oven bird, a wilson, a barred owl, blue herons (immature shown, top right), and lots of magnolia warblers and Baltimore orioles everywhere. The 40 to 50 birders added several new bird species to this year’s list, including a black vulture (a piece of data that supports the northern movement that species has been making), a Canada warbler, a yellow breasted chat and a wild turkey that one birder from Illinois saw sitting on its nest. Perhaps it was the wind, or the clouds, or the fact that many migrants just decided to pass up the Glen in hopes of better weather in Canada, but Saturday was “a really tough year for finding birds out there,” according to Glen Director Nick Boutis, who added that almost every warbler and more than half the birds counted were single sightings. “In other words, if you’d looked the other direction or happened not to hear that chirp, you’d have missed it.”

Birds on the brain

Copies of this and other photographs may be purchased from the News; please contact us via e-mail at ysnews@ysnews.com, or by phone, between 9:30 a.m. and 5: 30 p.m., Mon.–Fri.

Topics: Glen Helen, Make It Count for the Birds