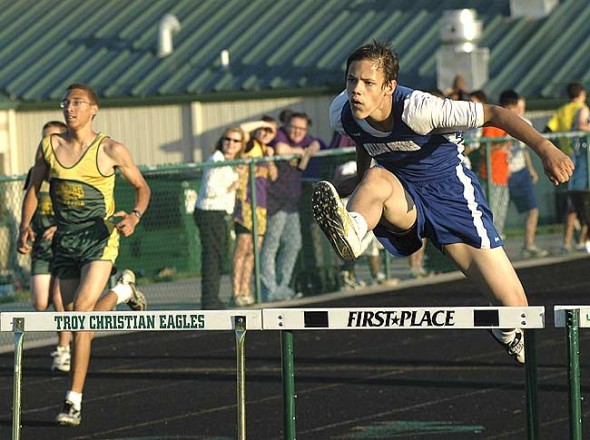 Cory Thompson hurdles the 300 meter at the Metro Buckeye Conference on Friday, May 14. (photo by Nick Dudokovich)

YSHS boys track and field coach John Gudgel led his team to a second-place finish in the Metro Buckeye League meet at Troy Christian High School on May 14. During the meet Gudgel, along with head girls coach Vince Peters, juggled the many responsibilities of a high school track coach. With stopwatch in hand, Gudgel was seen timing races, clearing hurdles from the track, and offering guidance to his team.

Gudgel will retire as the principal at the high school in June, but that doesn’t mean he won’t continue to impact the lives of his students. The long-time educator will remain the boys’ track coach, a position he’s held since 1981.

Gudgel’s history with the team goes even further than that. As a student in 1975, he won the Ohio High School state championship in the 440-yard dash. He then attended the University of Toledo, where he became the Mid-American Conference Champ in the 440 in 1978.

While the accolades are nice, Gudgel mainly just enjoys being around the students.

“It’s nice to watch the kids improve upon their marks and their efforts,” he said. “Whether it’s a kid who’s state caliber, or whether it’s a kid running for the first time that makes a significant improvement on his or her time, it’s just great being around the kids.”

The kids like being around him too. “I love him as a coach. He’s a big role model in my life,” senior Chris Johnson said. “The things he does and how he teaches us help us out a lot.”

Teammate Logan Norris-Sayres agreed. “He’s just a really good coach. He understands kids a lot and he understands our point of view in school and on the track team. [Coach Gudgel] is really easy to get along with.”

Johnson added that Gudgel is not a drill-sergeant type of coach, and lets the kids do what they need to do to compete. Gudgel’s coaching philosophy is shaped by his experiences as an athlete and an educator.

“Having been an athlete myself as well as an educator, I think I have a good understanding of the psyche of young people, athletics and students and just treating them with kindness and being supportive of them,” Gudgel said.

He also added that his coaching philosophy is the result of his own coaches and his family upbringing. “I had good coaches in high school and college and I borrowed some different things from them, along with the values my parents instilled in me,” he said.

When asked if Gudgel thought the high school version of himself would make a good coach, he let out a big laugh.

“John Gudgel in high school wasn’t even thinking about coaching,” he said.

When he does decide to retire from coaching, Gudgel hopes that he’ll be remembered for being fair and caring regardless of the athlete’s ability. However, that time is not in the foreseeable future. The soon-to-be-retired principal said he never even considered retiring from coaching.

“As long as I’m okay mentally and physically, I’ll be [coaching],” he said.

As for the meet last Friday, both squads turned in strong individual performances and used the contest to prepare for the post season. The boys’ squad finished just three points behind overall champion Emmanuel Christian Academy (139). The 4×800-relay team of Josh Meadows, Gabe Amrhein, Birch Robinson-Hubbuch and Zach McHugh, are peaking at the right time. Although they finished second to Emmanuel Christian, the boys turned in their fastest time of the year, 9 minutes, 57.7 seconds.

Senior Will Ripley avenged his loss at the Bulldog Invitational to Emmanuel Christian’s Joel Elliot, by out jumping Elliot, 6-0 to 5-10 in the high jump.

Other top finishes for the boys included the 4×200-relay team of Cosey, Meadows, Chris Johnson and Norris-Sayres, who finished first in the event with a time of 1 minute, 34.36 seconds. Cosey, Johnson, Norris-Sayres and Ripley also triumphed in the 4×100, defeating second-place Dayton Christian with a time of 46.15. Amrhein’s time of 4 minutes, 58.64 seconds, was good enough for third place in the 1600-meter run.

The girls’ 121 points trailed only Xenia Chritian (134) and Miami Valley School (163). The girls were led by the one-two punch of Anna Karling-Kahn and Paige Evans in the girls’ shot put. Karling-Kahn won the event with a final effort of 27-7.

Brickson also finished fifth in the 3200-meter run (13 minutes, 56.45 seconds), and along with Elizabeth Gonder, Lois Miller and Keturah Fulton, finished second in the 4×800-meter relay (11 minutes, 23.8 seconds) behind Miami Valley School (10 minutes, 47.6 seconds). Brickson, a senior who will be attending Lindsey Wilson College in Kentucky next fall on a track scholarship for her race walking abilities, received the coachability award at the meet for her efforts, according to Gudgel.