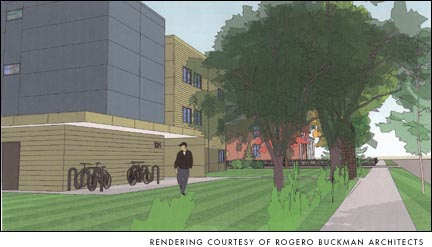 This week Friends Care Community withdrew its commitment to building the senior apartment building its leaders spent the past several years conceiving for the Barr property downtown.

Leaders of Friends Care Community announced this week that they will not pursue the senior apartment building they had planned for the Barr property downtown. Due to the economic downturn and Friends’ commitment to keeping the rent affordable, financing the estimated $3.7 million project became untenable, according to Mary White, president of Friends’ Board of Trustees. Friends had designed the three-story 30-unit building for the Barr property on the corner of Xenia Avenue and Limestone Street in 2008, and after several financial delays, had hoped to begin construction in 2010.

Instead of a new building, the Friends Care board now hopes to renovate its current campus on East Herman Street by turning some of the existing space into a temporary stay rehabilitation unit. The renovation plan will not add beds to the current campus, but it will allow the care center to collect Medicaid reimbursement revenue to support the extended care facility, which has suffered the results of state Medicaid cuts for the past six years, White said. The project is still in the planning stages, but the center expects it to move much faster than the last one, she said.

See this week’s News for the full story.

One Response to “Friends drops plans for Barr property”