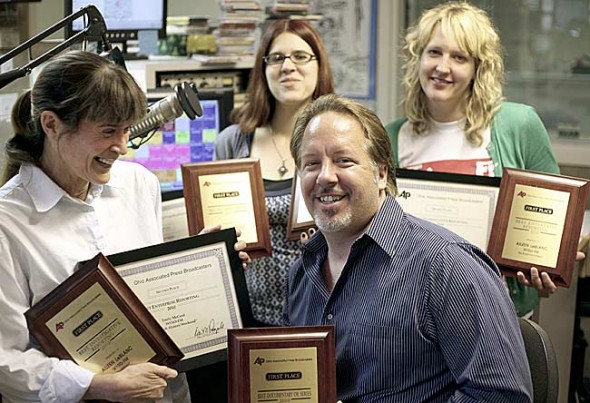 Aileen LeBlanc, Jerry Kenney, Juliet Fromholt and Emily McCord display their awards, presented to them on June 6 at the Ohio Associated Press Broadcasters 2010 luncheon in Columbus. (Photo by Neenah Ellis.)

WYSO cleans up at AP awards

WYSO received more awards than any other public radio station in the state, including:

WYSO produced its award-winning series, “Facing the Mortage Crisis,” with a grant from the Corporation for Public Broadcasting in collaboration with Think-TV, public television in Dayton.  LeBlanc acted as series editor for WYSO and produced feature spots for ThinkTV as well.

WYSO general manager Neenah Ellis said, “We are proud that WYSO  reporters have been recognized for their work and proud, too, of our association with Aileen LeBlanc. WYSO intends to build on this success and serve our listeners with even more local coverage of news and events.”

One Response to “WYSO cleans up at AP awards”