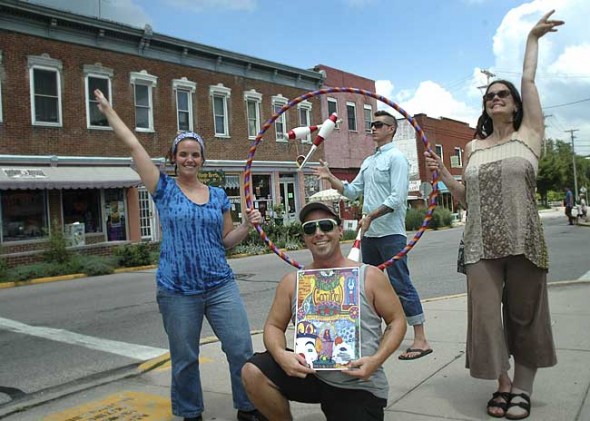 Dayton Street welcomes one and all to its first Cirque Carnival on Friday, July 16, beginning with a yogi sun salute performance at 6 p.m. The street party includes three stages with music, dancers, clowns, artist booths and food from the local restaurants. Shown are Mindy Harney, Patrick Harney (kneeling), Pierre Nagley and Lara Bauer.

All but big top on Dayton Street

If just for one evening, Dayton Street is taking back its historic main street status when it opens the first Yellow Springs Cirque Carnival on Friday, July 16, from 6 to 10:30 p.m. The street party featuring musicians and performers on a three-ring circuit, coincides with a Third Friday Fling and offers Dayton Street and its oft overlooked merchants an evening to shine.

Calling all freaks and artists in their fiercest lion and nimblest elephant costumes to celebrate midsummer, the Cirque will feature all the contortionists, clowns and theater of a real circus without the big top tent. Beginning at Corry Street from the post office to Dayton Street, and on around the corner to the Walnut Street traffic light, the Cirque features three performance stages, including The Rockin’ Stage for acoustics on Corry Street, The Ring of Amazement for jugglers and acrobats at the intersection of Corry and Dayton Streets, and The Jammin’ Stage for live bands at the intersection of Dayton and Walnut. A fourth stage in front of Village Cyclery is reserved for poets and spoken word performers.

Soul Fire Tribe will perform hooping and poi while YS Kids Playhouse and the Zoot Theater Company from Dayton parade large puppets in front of adult face painting by the Jafa Girls and local artisan booths set up along the streets. Williams Eatery will vend burgers from an outdoor grill, while Chen’s Asian Bistro serves up wok fare and Corner Cone and the Gulch do their best to keep visitors cool and quenched. The live bands include Full Circle, Soul Rebels, Dave Schumacher and Spanish Tony Sanchez.

Dayton Street is currently as full as it has ever been, according to Mindy Harney, whose Brother Bear’s Coffee Shop has brought even more life to the street since they opened there in 2008. The Corner Cone, whose owner Bob Swaney continues to beautify the corner lot, also draws people to the 19 businesses that thrive in that block, Harney said. But business could always be better, she said. And particularly on Street Fair days when business should be booming, for reasons related to the flow of commercial traffic through town, the display booths stop at the end of Corry Street, and shoppers often don’t venture across the street to the Dayton Street shops, she said.

“We’ve drawn more people over here and done things at night and added life to Dayton Street,” Harney said. “But a lot of merchants do still feel like it’s a challenge to get people over here.”

So when Swaney called Harney with the idea for the Carnival, she told him she had already been talking to other business owners about ways to work together on group advertising and drawing more people to the north street of town. The Carnival, as it happened, will be the kick-off event of the Dayton Street Alliance, an initiative to encourage cooperative business practices and networking on the Dayton Street block.

Friday’s event opens at 6 p.m. with a yogi sun salute to welcome in the evening light. The festivities will wrap up with a big fire performance and a parade down to the Dragon Tree, where a drum circle will close out the night.

This is a participation event. Come out, wear your costumes and bring your talents to Dayton Street.