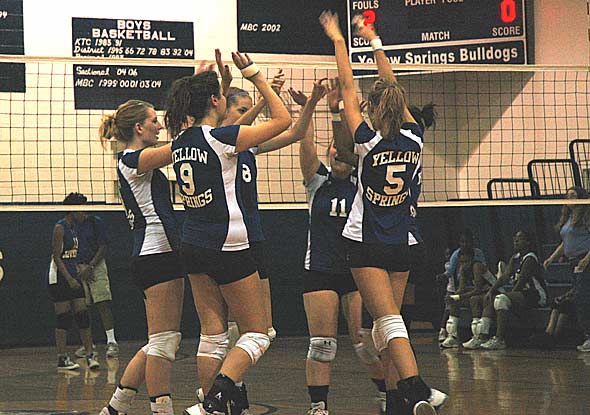 Carl Wiener shot an 83 at the sectional tournament in Greenville last week, earning him a spot in the state district tournament on Oct. 7. Wiener’s score tied for first among the four individuals advancing to districts and tied him for third in the scoring of all participants. Fellow YSHS golfer Zeb Reichert posted a 104.

Participating as individuals and as a team, the girls went to Xenia last week for their sectional tournament. The team came in 11th out of 12 teams with a total score of 475. Rachele Orme led with a 94, placing 19th out of 67 total golfers. Camara Cross posted a 115, Taylor Beck had 125 and Zoey McKinley scored a 141. The girls did not qualify for the district tournament as a team, nor did any individual advance.

The varsity volleyball team dominated Dayton Jefferson in three straight sets last Thursday, 25–14, 25–12, 25–11, improving their record to 7–10. The visitors kept the match close early on before the Lady Bulldogs ran away with the first set and kept their momentum strong throughout the second and third sets. Leading the team was Brittany Klotz with 12 points and six kills, followed by Maya Hardman, who had 11 points, nine kills and three blocks during the match. Tasha Perry helped her teammates put away the visitors with her 23 assists.

The junior varsity team dropped to Emmanuel Christian, 6–25, 25–17, 21–25, to move their record to 7–7. In the loss Kennedy Harshaw had eight points and three blocks, Mychael Roberts contributed six points and two digs and Hannah Brown had five points and three assists.

The boys soccer team scored seven goals in two victories last week before dropping an away match. The wins were their second and third of the year. In a home match versus Greeneview, the team won 2–0, with both goals coming in the second half. Jacob Trumbull broke the deadlock with a hard shot off the underside of the crossbar. He then took an Eli Biggs pass behind the defenders and sent a low, hard pass to the far post that Mario Cosey tapped in at close range.

At Emmanuel Christian later in the week, the team brought home a 5–0 win, netting all five goals in the first half. Aldo Duque opened scoring by finishing Trumbull’s cross from the left flank in the second minute of the match. Five minutes later Isaac Haller put the visitors up 2–0 when he headed in Cole Edwards’ throw-in. Trumbull increased the Yellow Springs lead in the 16th minute, assisted by Duque, with a 20-yard strike. Trumbull went on to net his second goal, assisted by Jamie Scott’s cross from the right corner. Just before halftime Will Turner earned the final goal of the night by tapping in a loose ball with the heel of his boot. Haller closed out the game in a goal for the Bulldogs, preserving the shutout win with a brilliant one-handed diving save to his right of a point-blank shot in the closing minutes of the contest.

The team’s winning streak ended at Sidney on Saturday against Lehman Catholic, in a match that ended 1–2. The Bulldogs went down by a goal before halftime, but pulled even early in the second half with a goal by  Cosey, assisted by Trumbull. With less than 10 minutes left Lehman Catholic earned the win with a head ball shot from six yards out that slipped through the fingers of the Bulldogs keeper.

In its 29–6 loss to Dayton Christian last week, six Bulldogs had strong defensive performances. Taran Pergram had 3.5 tackles and a blocked field goal, Zane Pergram had 5.5 tackles, Rodman Allen contributed six tackles, Bryce White made four tackles and Morgan Beard had 4.5 tackles. Ahmad Wagner made 12 tackles on the day and forced and recovered a fumble, which he returned 83 yards for a touchdown. On offense, Wagner was dominant, rushing for 70 yards on nine carries.

In tournament play last Saturday, the McKinney eighth-grade volleyball team lost to their friendly rival, Dayton Christian, for the third time this season by a score of 25–23, 22–25, 22–25. In the loss, Modjeska Chavez and Lindsey Jarrell both served a perfect 100 percent for each of their eight serves and Jesi Worsham contributed three aces.

The McKinney seventh-grade volleyball team ended their season on Saturday with a second-place finish at the tournament tri-match. This year the team finished with a 5–5 record, 4–2 in the league. In its defeat of Emmanuel Christian in the first tournament match, 25–14, 16–25, 25–20, Jalyn Roe led the team with 12 points, five aces and three assists, while Madeline Nielsen added 11 points, three aces and one kill. The team went on to lose their second match to Troy Christian, 25–17, 16–25, 25–23.

Team Coach Brady, will be holding practice at the Bryan Center from Oct. 4––14, except on Tuesday, for fifth- and sixth-grade girls interested in playing. Call Brady at 376-3774.