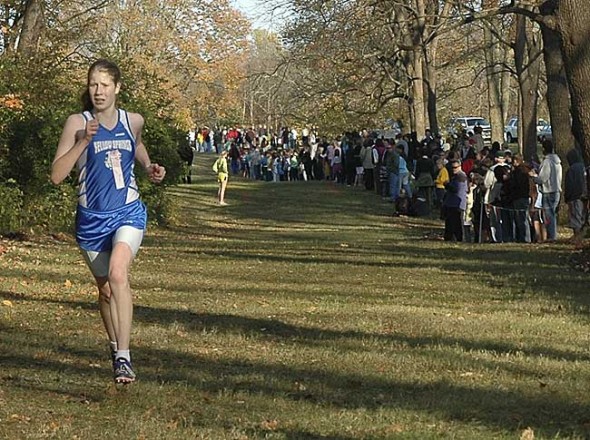 Lois Miller crossed the finish line of the John Bryan Invitational on Tuesday ahead of 145 area runners. She won the race nearly 50 seconds ahead of the second-place finisher. (photo by Megan Bachman)

With two thrilling overtime victories in the first rounds of tournament play, the boys varsity soccer team advanced to the division three district championship game for the fourth year in a row.

On Thursday, Oct. 21, the 10th-ranked Bulldogs challenged fourth-ranked West Liberty Salem, taking an early lead in the 10th minute when Aldo Duque netted a goalie deflection from four yards out. After giving up a late equalizer in the second half, the game went into overtime. With just eight minutes remaining in the second overtime, Jazz Exel launched a 40-yard strike from the left-wing to clinch the victory.

Last Monday’s match against fifth-ranked Lehman Catholic in the sectional championship was a defensive battle, and after regulation and two overtime periods failed to decide a winner, the match went into penalty kicks. Early in the shootout, Eli Biggs’ shot went over the crossbar and Isaac Haller’s was blocked by the goalkeeper as the Bulldogs went down 0-–1. Will Turner evened up the score with a well-placed shot inside the right post, and a diving save from YSHS goalkeeper Jacob Trumbull kept Lehman Catholic from pulling ahead. Trumbull then scored one of his own to take a 2–1 lead. Though Lehman Catholic pulled even, Nicky Sontag put Yellow Springs back on top, and a final miss by their opponent sealed the win for the Bulldogs, 0–0 (3–2).

The team plays Cincinnati Summit on Thursday, Oct. 28, at 6 p.m. for the district championship.

On Tuesday, Yellow Springs runner Lois Miller became the first Lady Bulldog to win the John Bryan Invitational in its 25-year history. Miller, a sophomore, finished ahead of 145 area runners and nearly 50 seconds ahead of the second-place runner. She is the third fastest female in the history of YSHS girls cross country.

Christina Brewer also ran well for the Lady Bulldogs, finishing 11th and Lonya Clark was the first YSHS runner to finish in the boys race, coming in 56th place out of 205 runners. In the middle school races, Yellow Springs runner Fielding Lewis placed third out of the 227 finishers and with his final time of 11:22, established the new middle school record for boys. Charlotte Walkey placed 31st for the girls team with a lifetime best of 14:04. A total of 789 runners participated in this year’s John Bryan Invitational, hosted annually by Yellow Springs High School.

Lois Miller and Talia Boutis ran personal bests at the district championships last Saturday to give the Lady Bulldogs a 13th place finish out of 33 schools. Miller’s time of 19:59 was a personal record and a sophomore class record. By placing seventh overall, she advanced to the regional championships and was named to the First Team All-Dayton District. Scoring with Miller and Boutis were Christina Brewer, Hannah Kumbusky and Alex Beer.

Senior runners Gabe Amrhein and Nerak Patterson ran lifetime bests at last weekend’s district championships, finishing sixth and 16th, respectively, out of 106 runners and qualifying for districts. But, despite their strong performances, and an additional lifetime best by fellow senior Lonya Clark, the Bulldogs came up just short of their goal of qualifying for the regional championships as a team. The Bulldogs finished sixth out of the 19 schools.

The girls varsity volleyball team ended their season in the sectional tournament on Tuesday, Oct. 19, at Piqua High School. The Lady Bulldogs, seeded 24th, lost to number two-seed Ft. Loramie in the match in straight sets, 4–25, 5–25, 11–25. Kennedy Harshaw contributed four points for the team, while Angela Allen had five digs and two blocks and Tasha Perry had three digs and two kills.