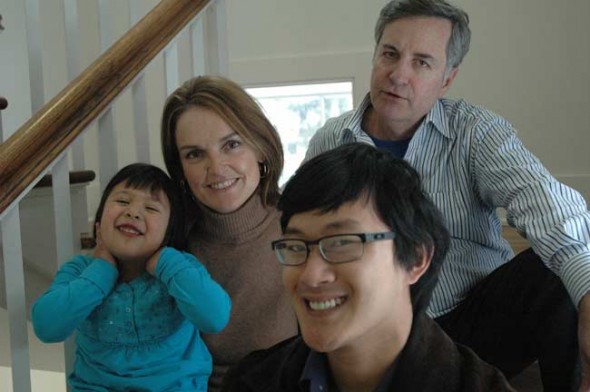 Antioch President Mark Roosevelt was at the college last week with his wife Dorothy and their children Matthew and Juliana.

New Antioch College President Mark Roosevelt moved to Yellow Springs this month with his family to begin a new chapter in higher education. Mark, his wife Dorothy and their daughter Juliana purchased the old Kahoe home on Hyde Road, where their son Matthew will find them on his visits home from college.
Roosevelt was chosen in October by the Antioch College pro tem board of trustees to reopen the college to its first academic class in the fall of 2011. He takes office in January and will begin by helping to complete searches for faculty and the positions of academic dean, development director and leader of student life.
Roosevelt replaces Antioch Interim President Matthew Derr, who took the position of visiting fellow for the Great Lakes College Association. Roosevelt formerly served as superintendent of the Pittsburgh school system. He is the great-grandson of Teddy Roosevelt.

Read the full story in the Dec. 30 Yellow Springs News.