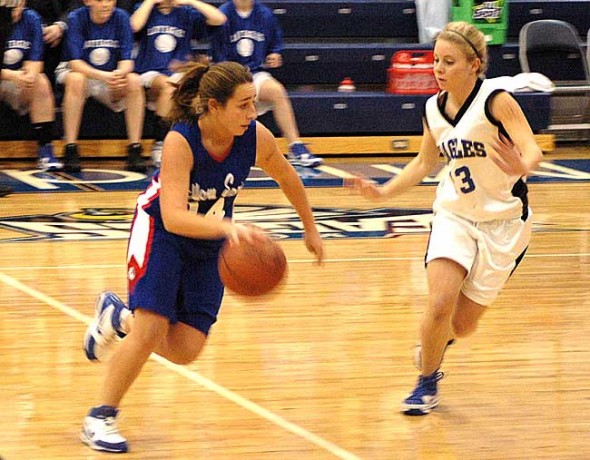 Alex Beer charges to the basket during the Lady Bulldog’s first win of the season, a 34–26 victory over Middletown Christian last Friday. Beer scored 10 points in the game.

At the Mason High School Invitational on Saturday, Dec. 4, three Yellow Springs swimmers competed along with more than 500 area swimmers, achieving some of their fastest times. Taylor Ford placed highest among the Bulldog swimmers, coming in 22nd in the preliminary race for the 100-yard breaststroke. Ford also competed in the 100-yard individual medley. Ford, Zoey McKinley (100-yard individual medley and breast stroke) and Olivia Rampage (50-yard and 100-yard free stroke), clinched their personal best times in five of the six events they swam at the meet.

At Middletown Christian on Friday, Dec. 10, the varsity boys basketball team lost 85–62. The team fell behind 47–25 by the half and, despite a fourth quarter rally, couldn’t make up the deficit. The team netted 31 points in the final quarter of the game, as much as the previous three quarters combined. Leading scorers for the Bulldogs were T. Bruntz with 17 points, G. Felder with 14 points and C. Edwards with 13.

On Friday, Dec. 10, the varsity girls basketball team achieved their first victory of the season at Middletown Christian (1-–4) to improve their record to 1-–3. In the 34–26 win, the Lady Bulldogs were led by Maryah Martin with 14 points, Alex Beer, who had 10 points, including a three-pointer, and Angela Allen with six points and 10 rebounds. The team led 19-–15 after three quarters before sealing the win by outscoring their opponent 15–11 in the final quarter.

The seventh-grade girls basketball team improved against Xenia Christian at home, losing by a final score of 18–10. In the eighth-grade team’s 41–9 loss, Kara Edwards had all the Lady Bulldogs’ points with three three-point baskets. 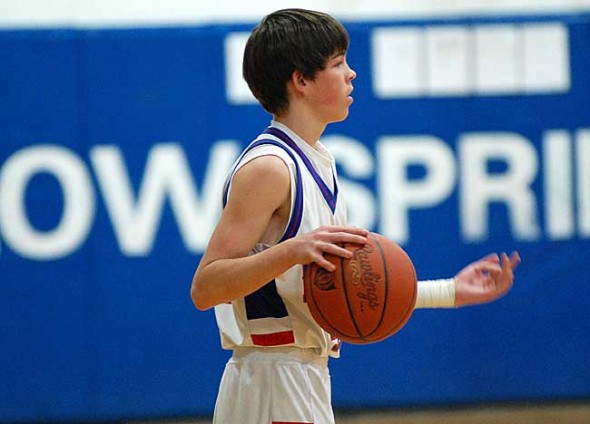 Jared Scarfpin dribbles at the top of key during the McKinney School eighth-grade team’s 37–11 win over Xenia Christian last Saturday. In the victory Scarfpin had eight points while Ahmad Wagner led the team with 10 points. (photo by Aaron Zaremsky)