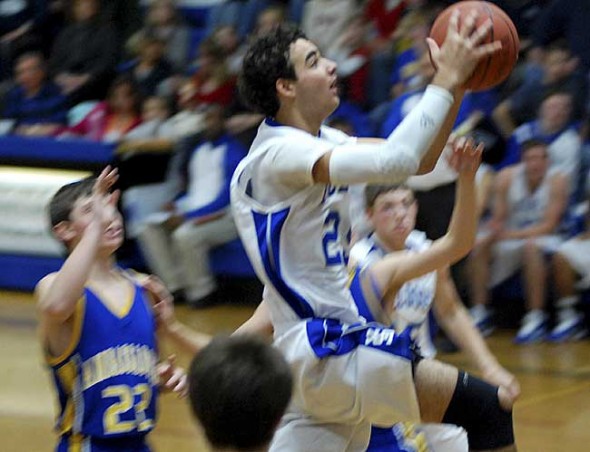 Roland Newsome led the Bulldogs to a 67–52 home victory over Xenia Christian on Friday, Dec. 17. (Photo by Aaron Zaremsky)

The Yellow Springs High School girls varsity basketball team won back-to-back home games last week, defeating Troy Christian and Xenia Christian to improve their record to 3-–3 on the season and 3–1 in the Metro Buckeye Conference. The Lady Bulldogs have now won three straight and are in second place in the conference.

On Monday, Dec. 14, the girls edged out Troy Christian, 26–23, despite trailing at the half 13–11. The Lady Bulldogs sealed their victory with a 15–10 performance during the second half of play. Maryah Martin led the team with 23 points, including 11 out of 18 from the foul line, eight steals and two rebounds. Freshman Brianna Ayers added three points.

At the first home game of the season on Friday, Dec. 17, the Yellow Springs High School boys varsity basketball team had their first victory of the year, a 67–52 win over Xenia Christian. The Bulldogs came out strong with a 20–9 lead after the first quarter, which the visitors couldn’t overcome. Roland Newsome led scoring with 15 points, C. Edwards had 12 and T. Bruntz chipped in seven.

Earlier last week, the boys team dropped a game at Troy Christian, 71–50. Though the Bulldogs were only down six at the half, they gave up 20 points and only scored nine in the final quarter. In the loss, Bruntz had 15 points and Edwards scored 10.

At the Kenton Ridge Invite held at Wittenberg University last weekend, the Yellow Springs swim team saw the shattering of many personal records in addition to a Wittenberg pool record.

The McKinney School eighth-grade team narrowly defeated Troy Christian last Saturday, 46–45, after overcoming a four-point deficit with less than a minute to play. Clutch baskets and late free throws by Ahmad Wagner and Liam Weigand provided the final margin of victory. Wagner led the Bulldogs with 17 points, while Jared Scarfpin scored 11 and Weigand chipped in nine.

The seventh-grade team defeated Troy Christian in a hard-fought victory by a score of 45–36. Isaiah Taylor paced the Bulldogs with 16 points, followed by Kaner Butler with 13. Devon Perry tallied eight points and nine rebounds.

Against Troy Christian last Saturday, the McKinney eighth-grade girls basketball team lost by a final score of 33–14. Kara Edwards had 11 points in the loss, with Molly Hendrickson contributing a three-pointer.

The seventh-grade girls lost 35–8 at home versus Troy Christian. Jalyn Roe had five points for the team, while Anna Williamson contributed two and Ashley Longshaw put in a free throw. According to Coach Evin Wimberly, the seventh and eighth graders are attempting more shots in their games, a good sign for the team’s progress.