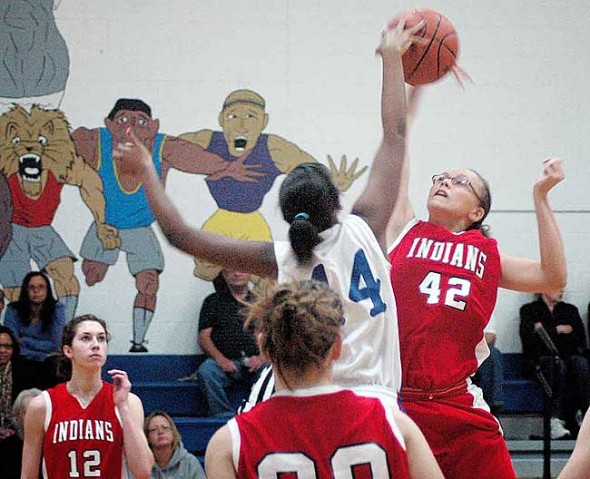 With only six swimmers competing at Southwest Ohio Coaches Classic on Saturday, Yellow Springs had a strong showing, placing 12th out of 44 teams. Yellow Springs juniors Erika Chick and Elizabeth Malone led the home team against qualifying swimmers from Dayton and Cincinnati.

In the finals, Chick took first in the 200-meter butterfly and second in the 200-meter freestyle, after winning the preliminary for that event by more than three seconds. Malone came in second in the finals of the 100-yard butterfly with a personal best time of 58:18 after winning the preliminary for the event.

Other Bulldogs posting personal bests were Rachel Meyer in the 500-meter free, Zoey McKinley for the 100-meter breast stroke, and the lone Bulldog boys swimmer Taylor Ford in the 50-and 100-meter freestyle.

In their 77–47 loss at Dayton Christian last Friday, sophomore Tyler Bruntz had 14 points, while Robbie Jones and Roland Newsome each scored 10. The Bulldogs went on to defeat Cedarville at home on Saturday, 53–46, going on a 15–5 run in the final six minutes of the game to get the win. Bruntz scored 11 points and Isaac Haller added 10 in the match.

At the Martin Luther King Jr. Classic at Lockland on Monday, Bruntz scored a career high of 37 points and snatched nine rebounds in the team’s 83–71 victory. Newsome contributed 15 points and 11 rebounds in the victory, while Greg Felder Jr. had nine rebounds and eight assists. The Bulldogs lost 48–25 in a defensive battle at Emmanuel Christian on Tuesday, scoring just eight points in the final half.

Against Dayton Christian the Lady Bulldogs were only down three at the half, but were outscored 30–12 in the final half of play, in part due to Dayton Christian’s 23 points at the free throw line. Yellow Springs was led by Martin for 20 points and Angela Allen, who had six points and six rebounds. Harshaw added four points.

Kara Edwards had a season high of 17 points in the McKinney eighth-grade girls team’s 28–20 loss to Dayton Christian at home last Thursday. Ashley Longshaw added three points on the night. The close game was their best game of the season, according to Coach Evin Wimberly.

In another nail-biter, Yellow Springs lost to Spring Valley Academy on Tuesday by a final score of 23–19. Edwards had 16 points in the game, while Chelsea Horton contributed two points and Sophie Davidson netted a free throw.

At Spring Valley Academy on Tuesday, Yellow Springs won 50–12, as every Bulldog player on the roster scored except the injured Nathan Miller. Scarfpin had nine points, Wagner and Chick scored eight each and Edward Johnson, Weigand and Whetsel had six each in the victory. Fielding Lewis, Theron Orme and White rounded out the scoring.

The McKinney seventh-grade boys team defeated Dayton Christian last Thursday by a final score of 47–23 to improve their season record to 5–1. Isaiah Taylor and Rodman Allen scored twelve each in the victory.