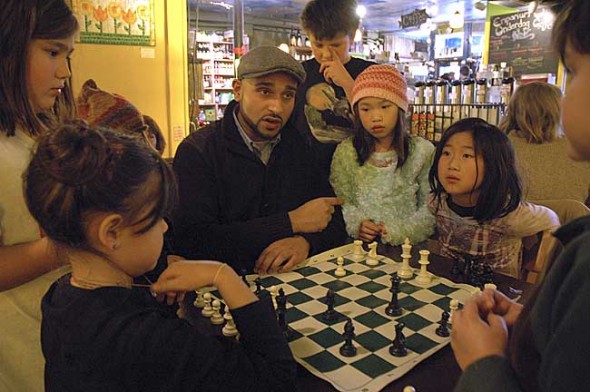 Check, mates!— Omar Durrani coached local chess enthusiasts on the smart moves at the Emporium last Sunday over a game between Amelie Maruyama, left, and Olivia Ling. Observing and trying so hard not to give away the answers were from left, Zenya Miyazaki, Jacob Woodburn, Eliana Ling and Kai Maruyama. (Photo by Lauren Heaton)

At the Emporium last Sunday, a group of local youth gathered around several tables in the back to play the age-old game of chess. At one table, Eliana Ling slid her white pawn out to start the match, and Amelie Maruyama moved a black pawn to mirror her adversary across the checkered grid. Soon two black bishops and a white knight were captured, and the queens were staring each other down from either end of their kingdoms. With a bird’s eye view of the board and a cool head for chess, Zenya Miyazaki was bursting to point out a potential check.

“Mr. Omar, Mr. Omar, she didn’t see it!” Ling said, both surprised and impressed with herself. Indeed, she had backed Maruyama’s king into check, and she wanted to expose the feat to their teacher, Omar Durrani.

Durrani and several other youth coached the players through the king’s capture before moving on to another table, where Jacob Woodburn and Kai Maruyama were engaged in a similar showdown. They had come because over all the television shows they could have been watching and Xbox video games they could have been playing, they had chosen to get together to play chess.

Durrani recalls making a similar choice in the second grade, the year he came to America from his home in India. Instead of playing sports or climbing trees, he was drawn to the two boys hovering quietly over a chess board, engrossed. He didn’t yet speak English well, but it wasn’t long before he taught himself to play chess and found his strength and identity in the game, Durrani said. Six years later, he took third place in the state championships as an eighth grader competing at the high school level.

It’s been about 14 years since then, but Durrani’s love for chess recently got him thinking about passing on his passion to the youth of Yellow Springs. Durrani first came to the village several years ago after seeing signs for the college during his commute to attend Wright State University from his home in Columbus. He immediately perceived a kindred spirit in a village that felt welcoming and open to embracing worldly people and ideas, he said. He thought it was a place where chess could thrive.

So last year he began teaching chess to the students in the Mills Lawn After School Care Program. He taught about 30 youth to play the game, and was so successful that he held several chess camps last summer at the Emporium, which brought more kids to the game. Despite all the other activities competing for their attention, the kids gravitate to the ancient board game.

“Chess is really fun,” Kai said, taking a breather from his portable Nintendo DS while waiting for a turn on the board.

“It’s a very, very, very old game,” said his sister Amelie. “These two kings were fighting, and they needed to find a new way to fight, so they started playing chess to see who was stronger.”

Those two kings, according to Durrani, were Muslim shahs in sixth-century India who decided to find a peaceful way to settle their claim over land by developing a game that represented a real battle. That history is part of Durrani’s heritage, and he feels the story of his country when he plays.

The chess story is also one that youth can learn a lot from, Durrani believes. In it are lessons about strategy and game plan, such as the rule to attack from two directions and always have a backup plan. Chess can teach kids to think ahead before they act, and even in check, Durrani teaches his players to never give up. They exercise math skills by counting points, and they also learn about humility and good sportsmanship by shaking hands after each game and complimenting each other on a game well-played.

While chess conjures images of old Russian men hunched over tables in the park, Durrani, a 27-year-old athletic-looking older brother, somehow makes chess seem hip. He praises players for their strengths and is careful to make space for the quiet ones too. They play chess as a group, helping each other to find the smart moves, and they always end with something akin to a sports huddle.

“Why do we like chess?!” Durrani prompts them. “Because it’s fun!” they yell back, as they throw their hands into a huddle over the chess board. “One, two, three, chess club!”

Durrani feels his chess group could grow into something much bigger than just a local novelty club. While he offers private lessons and organizes regular practice sessions, he is assembling a team of players to take to a chess tournament in Cincinnati the weekend of March 11–12. The event is sponsored by Bengals player Dhani Jones at his Bowtie Café, where a silver knight will be awarded to the champion. Durrani sees strong promise in the Yellow Springs youth and feels they could make a strong showing there.

Durrani thinks big, and he firmly believes that Yellow Springs could be a fulcrum for a burgeoning new chess culture. He is grateful to the receptivity he has found in the village, and the opportunity Emporium owner Kurt Miyazaki has given him to use that community space. He welcomes youth, parents and community members to join his effort to grow the chess movement.