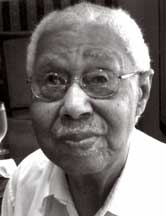 Alton was born and raised in Savannah, Ga., served in the United States Navy and is a veteran of World War II. After his service in the Navy, he graduated from North Carolina A&T State University with a degree in electrical engineering. There he met his wife of 60 years, Geneva Bradley. They moved to Ohio in 1950. He worked at Wright Patterson Air Force Base as a materials engineer until his retirement in 1982.

Services will be held on Saturday, Feb. 26, at the First Presbyterian Church. The family will receive friends from 2 p.m. until the memorial service, which begins at 3 p.m. There will be a repast immediately following the service.

In lieu of flowers, donations can be given to the First Presbyterian Church Memorial Fund or the Friends Care Community Center, 150 East Herman St, Yellow Springs, OH 45387.