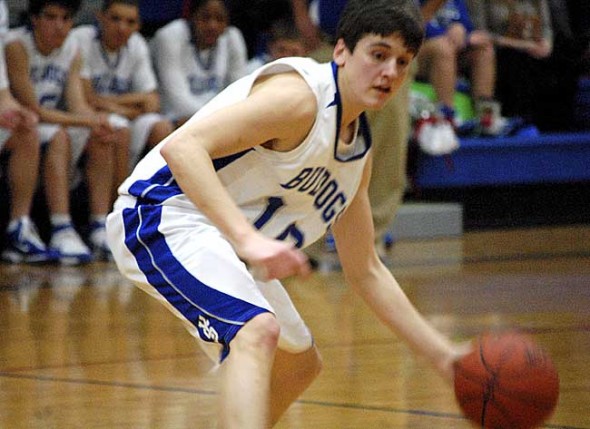 The boys varsity basketball team won a thrilling home victory against Middletown Christian on Friday, Feb. 11, by a final score of 78–77. After taking the lead in the first quarter the Bulldogs then fell behind the Eagles 42–45 at the half. The Bulldogs trailed throughout the second half and were eight points down with 2:38 minutes remaining. Isaac Haller and Tyler Bruntz scored the last 15 points by hitting five three-pointers between them to solidify the win.

Earlier in the week the team lost to Jefferson and defeated Miami Valley. In the loss at Jefferson, 72–36, on Feb. 8, Bruntz led scoring with 11 points, while Felder Jr. had 10 on the night. The Bulldogs couldn’t come back after a 27–7 deficit at the end of the first quarter. Defeating Miami Valley at home on Feb. 9 by a score of 68–60, the Bulldogs held the visitors to just five points in the first quarter. Edwards and Felder Jr. each finished with 15 points, while Haller scored 12.

A win over Emmanuel Christian at home, 48–40, improved the YSHS girls varsity basketball team’s regular season record to 7–13 (5–7). The Lady Bulldogs were up by five at the half and kept the game out-of-reach for the visitors. In her final home game, senior Alex Beer finished with eight points, seven rebounds, three steals and two assists. Maryah Martin led the team with 16 points, and Angela Allen had seven points and six rebounds on the night.

Earlier in the week, the team lost to Miami Valley, 46–32, after being down by just a point going into halftime. Yellow Springs was led by Martin with eight points and six steals and Kennedy Harshaw with six points, five rebounds, and two blocks. Beer added five points and Brianna Ayers and Paloma Wiggins each contributed four points.

The team now prepares to take on Tri-Village in the first round of the tournament on Feb. 19 at 5 p.m. at Brookville High School. Tickets are on sale at the Yellow Springs High School for $6.

The McKinney seventh-grade boys team defeated Emmanuel Christian 39–37 in their final game of the regular season. Devon Perry ended the night with a season-high 19 points, including nine out of 13 from the free throw line. Kaner Butler had eight points, while Rodman Allen and Taran Pergram each added five points in the victory.

The seventh grade team swept the Metro Buckeye Conference with a 9–0 record and overall record of 10–2. They entered the tournament with a first-round bye and play the winner of Xenia Christian and Miami Valley on Thursday, Feb. 17, at 6 p.m. at Miami Valley.

In their last game of the regular season, the McKinney girls basketball team lost 43–15 to Emmanuel Christian at home, even though the team played better in the rematch. Kara Edwards had 13 points on the night, while Jalyn Roe contributed a field goal.

The team went on to play Troy Christian in the first round of the tournament and lost 26–9. Kara Edwards finished with seven points and Molly Hendrickson added two points. Aggressive play by the Bulldogs kept the team in the game, while turnovers cost them.

In her first year as coach, Evin Wimberly had fun with her team, which improved over the course of the year.

“As with any season or team, they had their ups and downs but if these girls build up their confidence they have the potential to be really good players and become a solid team,” Wimberly said.