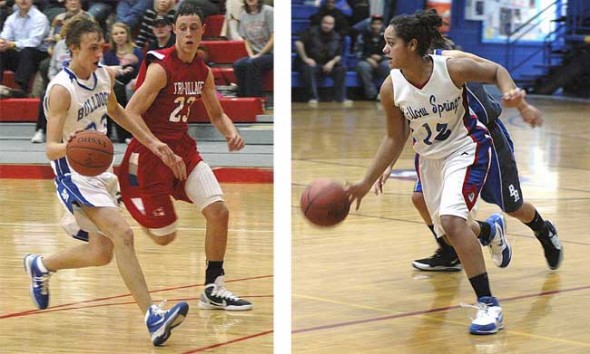 Outstanding Bulldog athletes were honored this week at the completion of the winter sports season.

Sophomore guard Tyler Bruntz received all-district honors and was selected first team all-conference in the Metro Buckeye. Coach Brad Newsome selected Bruntz as the team’s offensive most valuable player since he led the team in scoring at 15.3 points per game and in three-point shot percentage at 38 percent.

Point guard Greg Felder Jr., a sophomore, was honored as the team’s overall most valuable player, leading the team in assists (4.7 per game), steals (2.1 per game) and blocks and coming in second in team scoring at 11 points per game. He was selected to the first team all-conference and was the Metro Buckeye’s leader in both assists and blocks.

Departing senior guard Isaac Haller ended his career as the Bulldog award winner and was selected to the all-conference all-sportsmanship team. He came in fourth in the Metro Buckeye with assists, second for the team, and was the team’s leader in free-throw percentage, netting 71.4 percent from the stripe.

Junior forwards Austin Pence and Cole Edwards were honored with the award for highest field goal percentage, at more than 50 percent each. Departing senior center Devin Massive took the award for most rebounds, at seven per game. Jack Fugate received the team hustle and T.A.R.M. award, Antone Truss took home the coach’s award, Murphy Davidson was honored with the most improved award and Robbie Jones was selected as the team’s sixth man.

As a team the Bulldogs finished third in the Metro Buckeye, went 6–2 at home, and were fourth in the area in scoring, netting an average of 60 points per game. When the team’s 17-game home win streak ended on Feb. 14, it became the fourth-best streak in school history.

Junior swimmers Erika Chick and Elizabeth Malone were selected as the Metro Buckeye Conference’s female swimmers of the year for clinching conference victories and going to finish among the top swimmers in the state.

At the Division II state meet in February, Chick took third and fifth in her events, while Malone came away with fourth- and 12th-place finishes. The duo took first or second at all seven meets they swam this season, including clinching three district titles among them and qualifying for the state tournament for the third year in a row. Chick and Malone received their third-year varsity letters.

Freshman swimmers Zoey McKinley and Rachel Meyer received their first-year varsity letters. The two competed with Chick and Malone in the district-qualifying 200-yard medley relay and had strong showing in their individual events throughout the season.

Departing senior guard Alex Beer was given the Metro Buckeye Conference sportsmanship award and the team’s Bulldog award for her final season with the team. Beer was a four-year letter-winner and finished 13th in the conference in scoring with 7.53 points per game.

Center Angela Allen was honored as the team’s top rebounder; Kennedy Harshaw received the hustle award; Lois Miller was given the award for sportsmanship; Keturah Fulton earned the team spirit award; Paloma Wiggins won the award for most improved; and Maya Hardman was honored with the co-coach’s award.

First-year varsity letter recipients were Fulton, Harshaw, Hardman, Wiggins and Brianna Ayers and second-year letters were given to Allen, Martin and Miller.