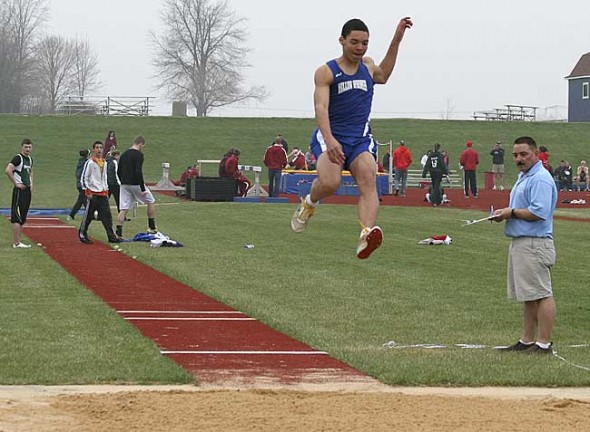 With a team of all freshman and sophomores, the 15-athlete girls track squad competed well in its first two meets.

Sophomore Lois Miller led the Lady Bulldogs to an 11th-place finish out of 16 schools at the Southeastern Invitational in South Charlestown last Saturday. Miller came in fourth in the 1600-meter race with a time of 5:56.56 and ran the lead-off leg of the 4×800-meter relay that placed seventh with a season best time of 11:59. Joining Miller on the relay were Talia Boutis, Christina Brewer and Ketura Fulton.

Maryah Martin led the way in the sprints, taking sixth out of 29 girls in the 400-meter dash with a time of 68.75. Martin also placed eighth in the high jump and anchored the 4×200-meter relay squad in a sixth-place finish (2:01.25). On that relay were Boutis, Brianna Ayers and Angela Allen.

Allen was the top performer in field events for the Bulldogs, spinning the discus platter to a distance of 78´7˝ despite slick, muddy conditions. That toss was good for a seventh-place finish out of 26 athletes.

Earlier in the week, the Lady Bulldogs finished third against two much larger schools at Springfield Shawnee. Martin had a stake in four winning efforts. The sophomore won the high jump (4´6˝) and the 200-meter dash (29.84) and anchored the winning 4×400- and 4×200-meter relays. Joining Martin on the 4×400-meter relay were Miller, Boutis, and Allen and the winning 4×200-meter squad was led off by Ayers, Allen and Camara Cross.

Other top performers were Sage Hale-Wolf, with a fifth-place finish in the 100-meter high hurdles, and Sierra Butler, who achieved two new personal records in the discus and 100-meter dash.

Antone Truss and Josh Meadows — along with other Bulldogs —performed well for the boys track team in their first three meets of the year. At Springfield Shawnee, Truss leaped 19´3˝ to take first place in the long jump and came in second in the high jump (6´2˝) and third in the 100-meter dash (12.5 seconds). Meadows won the 400-meter run in 56.21 seconds and took third in the 200-meter (25.1).

The 3200-meter relay of Meadows, Zach McHugh, Mitchell Brickson and Nathaniel Reed were runners-up with a time of 9:26.75. Other top individual performers were McHugh, who came in third in the 800-meter run (2:15.9), Greg Felder, who took fifth in the 200-meter run (26.0), and shot putter Charlie Fenimore.

A day after losing to Miami Valley, the tennis team cleaned up last Thursday, winning all five courts to improve its record to 4–4. Against conference rival Dayton Christian, at both singles and doubles, the Bulldogs were dominant.

The Yellow Springs McKinney track team celebrated 13 new personal records, three relay season bests and a new school record at the Waynesville Invitational on Saturday. In the 200-meter hurdles, Edward Johnson lowered his own school record from last year from 31.50 to 31.45 seconds. Competing against much larger teams, the Bulldogs did very well; the boys placed 10th and the girls 15th out of 23 schools competing.

Fielding Lewis placed second in the 1600-meter race with a time of 5:12.26. Long jumpers Ashley Longshaw and Rhona Marion placed fifth and sixth with leaps of 12´2˝ and 12´1˝, respectively. Oluka Oika placed sixth for the boys with a jump of 14´7˝. Cole McNeil-Harding also placed sixth in the discus with a throw of 90´5˝. The Bulldogs were also very competitive in the relays. The boys 4×200-meter team of Johnson, Matthew Conner, Bryce White and Ian Chick placed third with a time of 1:49.92. The girls 4×100-meter team of Marion, Ayshia Allison, Ashlyn Burch and Ashley Longshaw placed fifth. The boys 4×400-meter team of Johnson, Chick, Lewis and Nathan Miller also placed fifth with a time of 4:19.33.