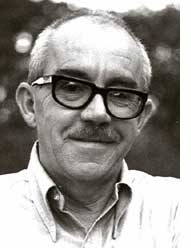 Walter Friz, a longtime resident of Yellow Springs and Bath Township, died at home on Sunday, April 24, a few days before his 90th birthday.

Walter was born in Germany and attended a prestigious high school in Bad Cannstatt. After graduation, he enrolled at the University of Stuttgart where he received his diplom ingenieur degree. After working for a German electronics firm for a number of years, he was recruited by the U.S. Department of Defense under “Project Paperclip” and hired by the U.S. Air Force in 1957. While at the DOD, he worked in various positions as a physicist at the Aeronautical Research Laboratory and the Avionics Laboratory. He produced dozens of patents and papers and also received numerous awards, including the Outstanding Civilian Career Service Award.

In addition to his love for physics, Walter was an avid woodworker. His many beautiful creations grace his entire home. He also enjoyed working on his minifarm and raising a multitude of farm animals. When not working around his home, he enjoyed vacationing at his self-built log cabin in Northern Canada.

He is survived and will be lovingly remembered by his wife of 51 years, Rosemarie, his son Alexander (Stephanie) and granddaughter Alexa of Calif., his sister Elisabeth of Hergiswil, Switzerland, his sister-in-law Ria (Werner) of Krefeld, Germany and numerous cousins and their offspring.

A private graveside service was held at Glen Forest Cemetery in Yellow Springs. There will be a memorial service held Monday, May 30, at 4 p.m.. in the Belton-Stroup Funeral Home in Fairborn. Flowers may be sent in care of the funeral home. Condolences may be made to the family at http://www.beltonstroup.com.