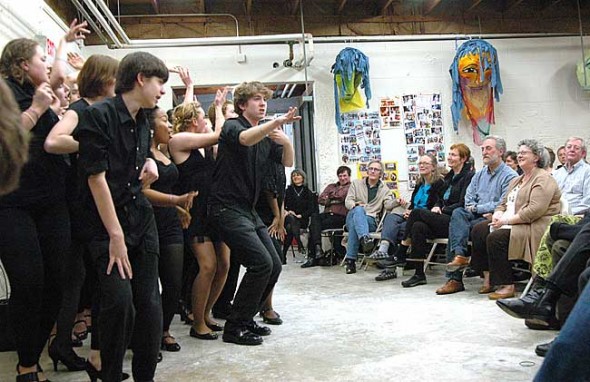 The April 16 YS Kids Playhouse gala fundraiser ensured this year’s summer season for the venerable institution. Above, YSHS students, many of whom are playhouse alumns, perform excerpts from Chicago, the upcoming high school spring musical. (Photo by Lauren Heaton)

At the YS Kids Playhouse gala on Saturday night at its new home on the Antioch College campus, the playhouse announced that it would indeed have a summer season this year. While critical federal funding for the organization was greatly reduced this year, after careful consideration, YSKP leaders decided to commit to one big summer musical and several theater camps and workshops. The original musical will be an investigation of the milieu, the music and the scene of the birth of jazz. Several workshops will feature theater and dance, as well as the production of vignettes based on the memoirs of local engineer Bill Hooper, who built the Glen Helen Building.

The playhouse also announced at Saturday’s event that its program participation fee has been reduced from $250 last summer to $100 per child this summer in hopes that more youth will be able to participate, playhouse founder and artistic director John Fleming said. YSKP hosted a group of about 75 community members at Saturday’s gala to celebrate its new space and to begin raising funds to sustain its mission to provide an arts outlet for area youth. The event featured dramatic readings, music and skits by area professional performers and a preview of the Yellow Springs High School spring musical, Chicago, which opens Friday, April 29, at 8 p.m. at Mills Lawn auditorium and will run that weekend and the following weekend. A curtain warmer will precede the Saturday, April 30 performance 6–7:45 p.m. at the Arthur Morgan House. Admission is $25, and includes a selection of hors d’oeuvres, desserts and sparkling wine.