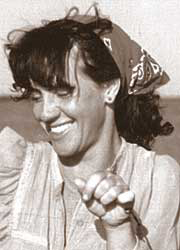 Christina Lynn Hess died at 2:20 a.m. on Thursday, May 5. She died peacefully and in the company of her family after a yearlong battle with breast cancer. She was 56.

Christina was born in Wilmington, Ohio, on Sept. 26, 1954 to Hazel Arment and Marion Hess. She was raised with her four brothers in Spring Valley and attended Xenia High School.

Her brothers instilled in her a love of music, which she pursued for the rest of her life. She was active as a singer-songwriter and recorded one album, entitled “Armor and Heartstrings”. She was the guitar player of the local traditional and Celtic band, Heartstrings, which she founded with her friends in the early 1990s.

Christina spent her college years at Ohio University and graduated with a bachelor of English degree in 1976. There she met her first husband, Jeff Simons. They moved to Yellow Springs where they had her first child, Oliver Simons, in 1978.

She met her husband, Christopher Moore, in Yellow Springs, where they bought a house and had two children, Nathan, in 1988, and Brendan, in 1992.

In addition to her musical endeavors, Christina worked at Antioch Publishing, The Antioch Review and also as a teacher after receiving her masters degree in education from Antioch University Midwest.

Those that knew Christina will remember her beautiful voice, love of the ocean and nature and her quick and compassionate smile. She is survived by her husband, Christopher Moore, sons Oliver Simons, Nathan Moore and Brendan Moore, brothers Brian Arment, Victor Hess and Tony Arment and sister, Carol Jean.

A memorial celebration will take place June 18. Time and location will be announced at a later date.