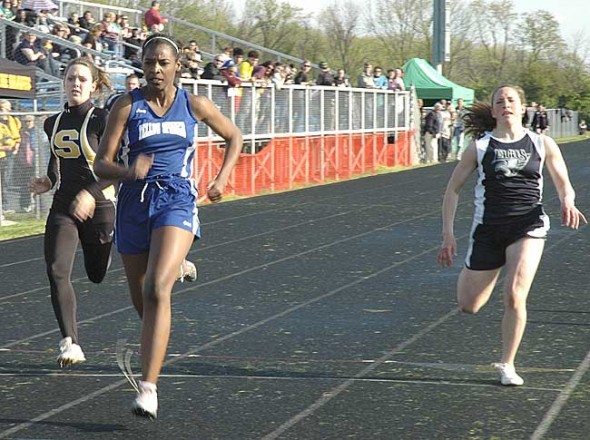 YSHS sophomore Angela Allen finished third in the 100-meter dash in 14.36 and won the discus throw at the Bulldog Invite last Friday, May 6. (Photo by Lauren Heaton)

Senior captain Addison Pettiford, ever solid at first singles, won 6–3, 6–2 on the day. Pettiford finished his final season 8–3 (3–3). On the second court, senior Aldo Duque matched Pettiford’s score and his season record. Senior Quinn Leventhal went undefeated for the season over five singles matches and last week overcame a tight second set to win on his birthday, 6–1, 6–7, 6–0. At doubles, Leventhal was 2–1.

Senior Isaac Haller teamed up with Savita Bathija at first doubles and triumphed 6–2, 6–4 in the match. Haller finished strong with a 5–2 doubles record, due to his dominance at the net. Finally, the pairing of Nick Miller-Jacobson and Rachele Orme made a stunning comeback to assure the team sweep — 2–6, 6–3, 6–3. According to Coach Donna Silvert, it was Orme’s penetrating and consistent ground strokes that set up Miller-Jacobson’s aggressive volley attacks for the victory.

Senior Nicky Sontag ended the season 3–3 (2–1 in the conference). Fellow senior Will Turner, who Silvert called the “go-to guy” of the team because of his versatility to play singles matches or team up with any partner on the doubles court, went 6–3 in match play.

“Will was a pivotal player for the Dogs, always willing to step up where needed with hustle and cunning play,” Silvert said. “These seniors always exhibited good sportsmanship and represented their school and community admirably.”

In the first round of the individual tournament, singles players Pettiford, Duque and Levanthal all notched victories. Pettiford and Duque went on to win in the second round before dropping to tournament high seeds in the third.

The McKinney boys track team blew out their opponents en route to a first place finish at the annual Middle School Bulldog Invitational. The team had 165 points to the runner-up’s 76 and defeated eight area opponents on the day.

The McKinney girls track team came in fourth place out of eight. Rhona Marion won the long jump competition with a leap of 13–04. Second places went to Charlotte Walkey in the 1600-meter race (6:22.45), Ashlyn Burch in the high jump (4´2˝) and the 4×100-meter relay team of Marion, Ashley Longshaw, Ayshia Allison and Burch.