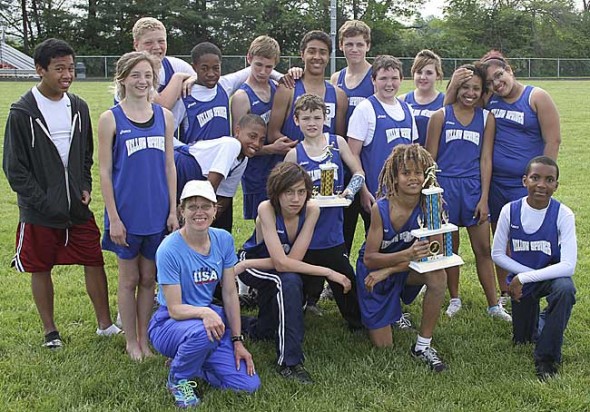 Mario Cosey successfully defended his 100-meter dash victory from last year by finishing once again in first place (in 11.37 seconds) at the district meet, held on Saturday in Dayton.

Lois Miller from the girls team came in second in the 3200-meter run with a time of 12:21 to secure her place at the regional tournment for a second straight year. Miller smashed the high school record in the 1600-meter run by nine seconds at the previous week’s Metro Buckeye Conference Championships.

Also qualifying for regionals were Antone Truss, who placed third in the high jump and Angela Allen, who took fourth in the discus. Allen barely qualified after coming in ninth in the preliminaries and sending her second throw of the finals out-of-bounds. In her last attempt, she threw the discus to 91 feet and 5 inches, leapfrogging the competition to qualify in the last position.

Though they did not qualify for regionals, several other Bulldogs turned in stellar scoring performances that earned them a place in the district finals. Among them were the girls relay team of Brianna Ayers, Miller, Talia Boutis and Maryah Martin, who ran to fifth place in the 4×200, and the team of Ayers, Allen, Boutis and Martin, who took seventh in the 4×100 with a season best run of 56.06.

In addition, Zach McHugh came in sixth in the 1600-meter and seventh in the 800-meter and Josh Meadows took eighth place in the 110-meter hurdles. Truss came close to qualifying in his other events, placing fifth in the long jump and eighth in the 200-meter dash while Martin was just shy of qualifying in the high jump and long jump. Taylor Beck had a season best shot put of 23 feet and ¾ inches, good for 22nd place and Christina Brewer finished 15th in the 1600-meter.

Regionals take place on Friday, May 27, at Troy Memorial Stadium in Troy. Cosey, Miller, Truss and Allen hope to place in the top four for their event at regionals to qualify for the state tournament.