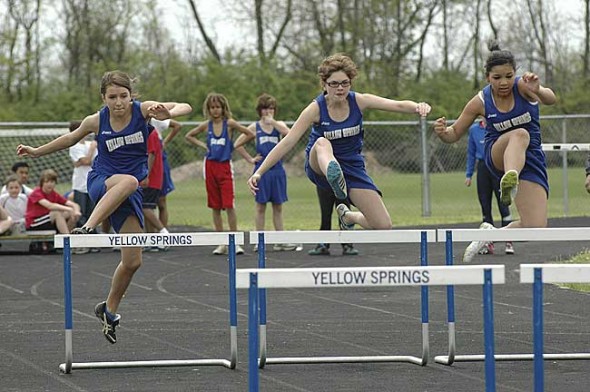 Second-singles player Aldo Duque won another nail-biter for the Bulldogs (6–4) to give them a narrow victory over Cedarville last week. The day’s matches went back and forth, with the visitors prevailing over the second-doubles duo of Nick Miller-Jacobson and Rachele Orme and over Savita Bathija at third singles.

But then the first-doubles pairing of Isaac Haller and Will Turner won in a closely-fought battle, ending their match in a second set tie-breaker. And captain Addison Pettiford stayed strong after losing a second-set tiebreaker to pull out a 6–2, 6–7, 6–3 win in the first singles position.

With the teams even at 2–2, all eyes were on the match between Duque and his Cedarville opponent Ian Molnar. Duque dropped the first set 3–6 before scraping out a 6–4 victory in the second. Late in the match, Duque and Molnar were at a 5–5 draw as the Bulldog hopefuls watched nervously beyond the fence. Duque won the crucial next game and went on to finish his opponent 7–5 to take the court and the team victory.

Later in the week, Yellow Springs shut out Southeastern, winning all the courts including the reserve doubles. In singles, Pettiford bagged his opponent 6-0,6-0, Duque dropped only one game in his win and Quinn Leventhal won the third-singles court in straight sets. Turner and Haller dominated the net with an aggressive 6-0, 6-2 victory and second-doubles team Bathija and Nicky Sontag came into their own in a 6-0, 6-3 win. At reserve doubles, freshman Rachele Orme and Nick Miller-Jacobson had a big 6-1, 6-1 win.

Antone Truss jumped his way to the podium at the Kenton Trace Conference Invitational on Monday, placing in both the high jump and long jump at the event. Truss defeated the competition with a 6’3″ high jump, and his 19’10” long jump was good for a second place.

As a team the Bulldogs boys came in seventh place at the meet, a gathering of teams from the former Kenton Trace Conference.

On the track, Zach McHugh ran the 1600-meter (metric mile) race in 5:04 to take third place while Josh Meadows sprinted to fourth place in the 400-meter in 55.8 seconds. Gabe Amrhein came in fifth after completing the 800-meter race in 2:14. Also coming in fifth place was the 3200-meter relay squad of Meadows, McHugh, Mitchell Brickson and Nathaniel Reed. Reed went on to take sixth in the 3200-meter race, which he finished in 11:54.

Last week Truss was the only boys competitor to participate in the prestigious Wayne Invitational, which comprises only Division I schools. Truss finished in third place in the high jump with a leap of 6’0″.

The home quad meet from last Wednesday was canceled due to the weather.

The McKinney Track and Field team crowned a school boys and girls champion at their intermural meet on Saturday. Rhona Marion won the girls category with a new school record of 191 points, a single point more than the old school record held by Kennedy Harshaw.

In the boys competition Kaner Butler won with 193 points and Ed Johnson trailed with 192 points. Zane Pergram tied the school record in the pole vault with a jump of 7’6″ during the meet.

The McKinney championship was introduced several years ago by McKinney School Coach Peter Dierauer, a former decathlonist. Every competitor competes in a sprint, a jump, a throw and a middle-distance run in order to try out different events and reward an all-around winner on the team.