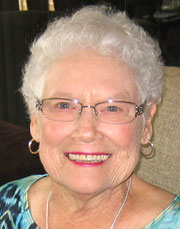 Peggy Lou Pitstick died unexpectedly on Sunday, June 19, at Kettering Hospital, one day after her 78th birthday. Peggy was an active, loving participant in the lives of her family and friends up to the very day she was admitted to the hospital on Wednesday, June 15.

Peggy was the second of six children born in Xenia to Ralph Sr. and Thelma Smith. She grew up in Goes Station and Xenia and graduated from Xenia High School. On Valentine’s Day 1953, she married Roger L. Pitstick of Fairborn. Living on the edge of Yellow Springs, they farmed and raised six children with much love and care. Peggy also worked as an administrative secretary at the Wright Patterson Air Force Base hospital, as an LPN and later as an optometric assistant. She was a member of St. Paul Catholic Church and many Catholic charities.

Peggy loved life and being on the go. She enjoyed taking trips near and far with family and friends, entertaining, wintering in Florida, bowling, cooking her famous oyster dressing, learning how to operate her iPad and playing bridge with friends. Her husband Roger died two-and-a-half years ago after 55 years of marriage to Peggy, leaving her with a large void. Peggy bravely continued on filling her life with the love, laughter and fun of family and friends. With great sadness, Peggy’s family mourns the loss and celebrates the life of a mom, grandma, great-grandma, sister and friend.