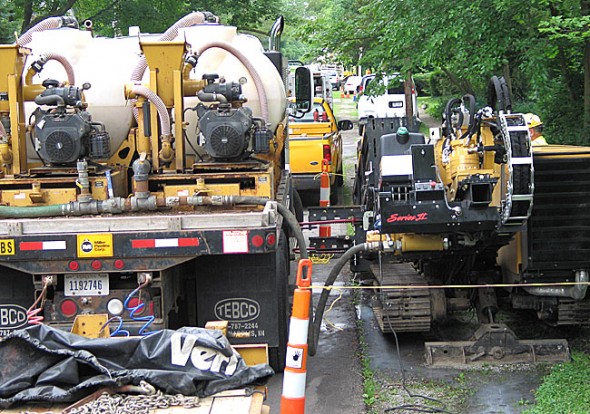 Vectren is replacing aging gas lines in areas around the village. Construction may impede passage or parking. Click the link in the article below to find dates and areas of work. (Photo by Matt Minde)

This week Vectren gas company began the process of replacing old residential gas lines that serve the older parts of the village. Vectren is contracting with Miller Pipeline to complete the job, which is expected to take three to four weeks, Vectren spokesperson Chase Kelley said last week.

The project includes replacing 6,600 feet of low-pressure natural gas mains with 3,200 feet of 2-inch mains and 46 individual service pipes to residential meters. The mains to be replaced in the coming weeks include those on Brannum Lane, North College Street, West Davis Street, and Xenia Avenue from South College Street to Limestone Street.

Click here to see a map of construction areas.

The work involves locating and digging up old gas mains, which are generally found three- to four-feet deep on or near the edge of the roadways, and replacing them with new piping. Miller contractors will be digging up roadways, some sidewalks, and those properties whose residential service lines need replacement, but expect to return the areas to their previous state, including reseeding grass, Kelley said.

The project is part of a 20-year program to replace 1,700 miles of aging infrastructure in Vectren’s service territory.