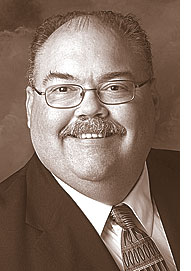 David N. Triplett, PA-C, died suddenly on Monday, Aug. 1 at home in Yellow Springs. He was 51.

David was born on Jan. 16, 1960, in Xenia to the late Norm Triplett of Fairborn and Mildred (Taylor Triplett) Black of Hillsboro, Ky.

He was committed to social justice and to service, working in a variety of careers that helped others. His current career was as a physician assistant, working for Hospitalist Services at Greene Memorial Hospital in Xenia, and he worked previously at Robert Morrison, MD and Associates in Xenia. Prior to becoming a physician assistant in 1995, he had worked as a Greene County Sherriff’s Deputy, as the director of the American Red Cross homeless shelter in Xenia, as a family counselor at the Clark County Juvenile Court and as a juvenile probation and parole officer for Clark and Montgomery Counties.

His second great passion was the youth of Yellow Springs — he was a member of the music committee for the Yellow Springs Schools and previously was a coach for Yellow Springs community coach pitch baseball. Even long after Katie, Mary and all of their friends had finished playing in the sand between pitches, he proudly wore a new Perry League t-shirt every year.

David enjoyed being at home with his family and his dogs. He also enjoyed riding his motorcycle, “Cadillac camping” and playing with his tractors. His sense of humor and boundless enthusiasm for family will be missed.

David was a caring husband, devoted father and was well-loved by all of his extensive family. He is survived by his wife of 20 years, Stephanie Ann Triplett; daughter Katherine Elizabeth Triplett; brother Robert Michael (Thaddene) Triplett of Yellow Springs; and their children Christopher David (Rachael Hawkey) Triplett of Austin, Texas and Nicholas Michael Triplett, Claire Marie Triplett, and Mary Frances Triplett of Yellow Springs. He is also survived by sister Lynda June (Junior) Clark and her children Joseph Leon Roberts and Faye Ellen Roberts of Flemingsburg, Ky.; by sister-in-law Caroline Helen (Daniel) Gentry and their children Noah David Gentry and Rebecca Lynn Gentry of Oakwood, by brother-in-law Max Dieter (Maureen) Lake of Yellow Springs and brother-in-law Patrick Delbert (Carla) Lake and their son Henry Max Lake of Beavercreek and by sister-in-law Jamie Elizabeth (Brook) Schmidt and their children Hunter Brook Schmidt, Aiden C. Schmidt and Brycen James Schmidt of Hanover, Md. Dave is also suvived by his aunt Faye (Fred) Hill of Medway, his step-father Clyde Black of Hillsboro, Ky. and numerous other relatives and friends.

Visitation will be held at Jackson Lytle and Lewis funeral home in Yellow Springs on Friday, Aug. 5, 2–4 p.m. and 6–8 p.m. Funeral mass will be at St. Paul’s Catholic Church on Saturday, Aug .6 at 10 a.m. In lieu of flowers, memorial contributions may be made to the Katie Triplett Educational Fund at any U.S. Bank branch or to any charity of choice that supports the children of Yellow Springs. Visit http://www.jacksonlytle.com for more information and to express condolences.