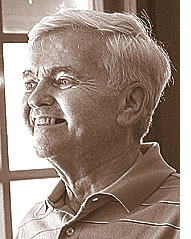 John F. “Jack” McIlhargey of Waterville, Ohio died Monday, Sept. 26, at Heartland of Waterville Nursing Home where he had lived the past few months. He was 67.

Jack was a 1962 graduate of St. Francis de Sales High School and 1966 graduate of Ohio State University with a bachelors in music and theater. Jack volunteered for the Peace Corps, and then served two years of active duty in the U.S. Army in the late 1960s. In the 1970s he had an importing business in Toledo, and several times ran for political offices. He also worked several years in sales for Mathews Ford in Oregon. Since the late 1980s, he lived and worked in Columbus, where he was an accomplished pianist and composed over 200 pieces of music.

Funeral services will begin in the mortuary on Thursday, Sept. 29, at 10:15 a.m., followed by a Mass of Christian Burial in St. Joseph’s Church, Maumee, at 11 a.m. Interment will be at St. Joseph’s Cemetery. The family would appreciate masses offered for John. Online condolences may be given at http://www.coylefuneralhome.com.