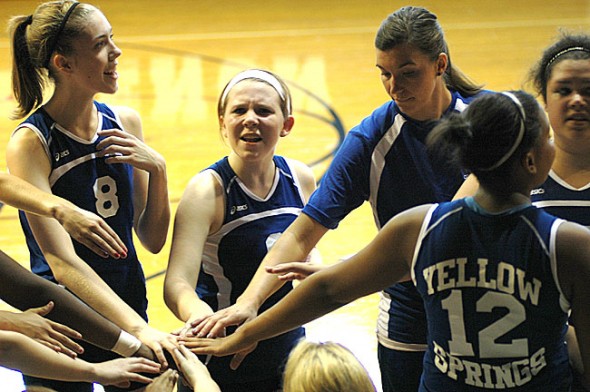 The YSHS varsity volleyball team brought it in for a cheer during the nail-biter first game of the team’s 25–21, 25–17 loss to Cedarville last Saturday. From left are Maya Hardman, Hannah Brown, Coach Lindsay Kerns, Kelsey Fox and Kennedy Harshaw. (Photo by Megan Bachman)

At the season opener tri-match in Greenon, the Yellow Springs High School volleyball team fell in tough matches. Despite slow starts in its first two games versus Cedarville, the Bulldogs battled back, taking leads in both games before dropping back against a strong Cedarville squad (25–21, 25–17). Later, Yellow Springs lost to Greenon, 25–13, 25–15.

The Yellow Springs High School boys soccer team opened their fall campaign by travelling to Greenon High School to challenge the Knights. Greenon came out charged up from the first whistle and put their team up 2–0 in the first five minutes. The Bulldogs trailed 3–0 by halftime. Antone Truss got one back for Yellow Springs early in the second half, but three more unanswered goals by the Knights put the Bulldogs on the wrong side of a 6–1 final score.

With nine freshmen, the young YSHS girls soccer team has started to play as a unit with a loss, a tie and a win in early season play. The Lady Bulldogs fell to Bethel 6–0 in a season opener but the offense of Keturah Fulton, Kara Edwards, Brianna Ayers, and Maryah Martin created goal scoring opportunities throughout the entire game. Katie Triplett anchored the Yellow Springs goal with 9 saves. Paloma Wiggins directed the defense.

The Lady Bulldogs tied Southeastern 1–1 last week before defeating Yellow Springs women’s alumni team in a friendly match later in the week. Goals were scored by Niki Worsham against Southeastern and Kara Edwards against the alumni.

The Bulldog golf squad dropped to 1–1 on the season, after narrowly losing to Mechanicsburg at Indian Springs Golf Course last week (224–225). Rachele Orme had the best score for the team, with a strong finish of 52. Theron Orme notched 53, followed by Liam Weigand (56), Taylor Beck (63) and Morgan Beard (90).

The Yellow Springs high school girls cross-country team raced to a sixth-place finish out of 26 participating schools in their first meet of the season last weekend in West Milton. Speedy junior and team newcomer Alexandra Brown, who hopped up from a rolled ankle to come in 19th place out of 169 girls, led the team. Brown averaged 6:53 per mile in her 21:06 performance in the 3. 1 mile race.

Rachel Meyer, getting in prime condition for this winter’s swim team, is proving her potential as a runner, according to Coach Vince Peters. Meyer dropped from her previous best of 24:59 to 23:35 – an average of 7:36 per mile. Also running for the Bulldogs in this initial outing were Zoey McKinley, Talia Boutis, Christina Brewer and Lois Miller.

Though the boys cross-country squad did not acquire a team score at its first meet, several individuals competed well on the day. Seniors Zach McHugh and Than Reed ran in the small school 3.1 miles race. McHugh finished in 18:51 placing 49th overall out of 211 runners. Reed was 82nd in 19:40.

In the open two mile, newcomer Hunter Lawson led the way. The junior, running in his first-ever cross-country meet for the Bulldogs, placed 29th overall in 13:19. Conner Gravley-Navello led a pack finish as the next three Bulldogs placed 43rd, 44th, and 45th. Teaming with Conner were fellow frosh Josh Seitz and senior Elias Mulhull.

With strong interest in the early weeks of the season, the Yellow Springs High School football team is on pace to play this season. About 18 to 19 athletes have been practicing, enough for the team to compete, said Athletic Director Steve Rossi this week. Because its first two games have been cancelled by its opponents, the season will open at Carroll on Saturday, Sept. 7, at 1 p.m.

Charlotte Walkey is the only one who has laced up her spikes for the McKinney girls cross-country team this year. An eighth-grader, Walkey started the 2011 season off with an outstanding effort — speeding to a 13:50 clocking over the two mile course at the Bob Schul Invitational. This time placed her 18th overall out of the 219 runners participating in the junior high girls race. Her mile split was 6:34. Coach Peters called the run “outstanding.”

The rest of the junior high boys cross country team also showed great potential in the season’s first outing. Placing 53rd overall in his first cross-country meet was Hayden Orme. Hayden had a big second mile – an uber-fast negative split of 6:32. Levi Brown, another newcomer, was 90th in 14:05 with a negative split. Gabe Trillana and Oluka Okia, both of who are also just getting into shape, placed 148th and 200th respectively, to help the Bullpups place 13th as a team out of 25 scoring schools.

The McKinney eighth-grade girls volleyball fell in its first four matches of the season despite spirited play. In the loss to Xenia Christian (25–22, 25–4) the Lady Bulldogs were led by Meredith Rowe with four aces and Madeline Nielsen with two aces. Dropping to Troy Christian (14–25, 25–14, 25–18) the Lady Bulldogs were again led by Nielsen (11 points, 3 aces) and Rowe (9 points, 4 aces). Rowe added seven points and two aces in a match versus Middletown Christian, which the Bulldogs lost 25–15, 25–12.

Later in the week, Yellow Springs fought hard but come up on the short at Emmanuel Christian (25–18, 18–25, 25–16). Rowe had 11 points, seven aces, Nielsen scored seven points with one ace and Ashley Longshaw added five points and two aces.

By dominating first games, the McKinney seventh-grade girls volleyball team charged out to a 3–0 start on the season. The team dealt defeats to Troy Christian (25–20, 25–27, 25–21), Xenia Christian (25–19, 25–17) and Emmanuel Christian (25–9, 23–25, 25–15) in match play. After dropping its second game to Troy Christian, the Bulldogs served strategically to their opponent’s weak spots and won the match handily. Instrumental to the victory was Kasey Linkhart (13 points, 8 aces) and Aliza Skinner (8 points, 3 assists). Against Xenia Christian, Linkhart contributed 15 points while Gracie Wilke earned eight points and five aces.

Due to lack of interest, the McKinney football season has been cancelled. Rossi said the school might organize a flag football program in its stead.