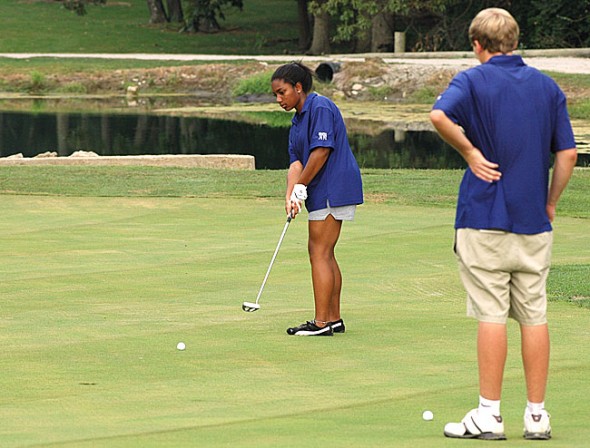 Sophomore Rachele Orme, who last season averaged 48 from the boys tees, again led the Bulldogs with stellar play over the front nine. Orme finished with 42, which was just six over par and the match’s second best score.

The rest of the team are freshmen, and showed potential as the YSHS golf team grows. Freshmen Theron Orme ended with 50, Liam Weigand was just behind with a 51 and Taylor Beck and Morgan Beard both scored 66. As a team, the Bulldogs took 209 strokes to Dayton Christian’s 170.

The team is now 1–2 after notching a victory last week against Mechanicsburg and losing in their season opener to Bethel. They next take on Greeneview at Sebastian Hills Golf Course in Xenia on Sept. 17.

Visit https://www.ysnews.com/sections/sports for the full story and photos from the match.

This week the YSHS boys soccer team held their home opener and gutted out their first win of the season, topping Belmont by a final score of 5–2.

Jacob Trumbull opened the Bulldogs’ scoring account just seven minutes into the game, assisted by Wade Huston. Ten minutes before the break Belmont knotted the score at one each. Four minutes later Trumbull slammed a free kick into the back of the net from 15 yards out, assisted by Jared Scarfpin, who had pretended to tie his shoe. One minute later a quick restart by Scarfpin near midfield sent Trumbull to goal on a fast break and a Yellow Springs 3–1 lead at the half.

Fifteen minutes into the second half Nathan Miller added to the Bulldog lead, slicing through the Bisons’ defense before placing his shot past the Belmont goalkeeper at close range. Ian Chick picked up the assist. Less than 2 minutes later it was Huston and Miller combining to send Chick to goal for the final Yellow Springs score of the night. A penalty kick awarded to Belmont with 20 minutes remaining in the game closed out the scoring for the night.

Last week the team travelled to Springfield and came up short, falling 5–0 to Catholic Central. Despite the lopsided scoreline the Bulldogs were able to generate numerous scoring chances for themselves, but failure to finish those chances kept the Bulldogs off of the scoreboard. And on the defensive end there were Yellow Springs highlights as well, including a stopped penalty kick by Eric Lawhorn and a goal-line save with the head by John Shaw.

Three of the six runners of the YSHS varsity girls cross-country team runners not only survived tough terrain and heat last Saturday at the Ohio Classic Invitational in Hillsboro, but finished with season-best times. The Lady Bulldogs placed a surprising strong third overall, among 22 participating high schools, upping their season record to 19 wins and seven losses.

Out quick for the girls squad for the second week in a row was Alexandria Brown in 22:08 for the 3.1 mile race. Leading for over half the race, Brown wilted a bit in the heat while climbing the hills over the last mile. But the junior held on to her wits during the final downhill stretch to place seventh place, out of 126 runners. Tallying 10th overall, Lois Miller improved on both time and place from a week earlier with a new season best 23:18. Rachel Meyer finished among the medalists with her second strong performance in as many weeks, placing 15th in 23:57. Talia Boutis, in 47th place, posted a season best in 26:07. Christina Brewer completed the scoring for the Dawgs with a 75th place effort in 28:20. Zoey McKinney posted a new life time best of 31:55.

Zach McHugh led the YSHS varsity boys cross country team to its first finish of the season last Saturday. McHugh was 26th overall out of the 248 runners from 25 high schools that competed in the Ohio Classic in Hillsboro. After a well-paced first mile in 5:43 Zach went on to average 6:18 per mile to complete the 3.1 mile test of endurance in 19:31.

Nathaniel Reed was 80th in 21:10 as the temperatures rapidly rose with the duration of each athlete’s race. Connor Gravley-Navello was the third man on varsity, finishing 180th in 24:52. Josh Seitz was just steps behind in the mass finish, placing 186th in 25:04. Elias Mulhull wrapped up the scoring in 223rd as the Bulldogs soared to 495 points, just enough to secure their first four wins of the season.

The YSHS varsity volleball team got its first win of the season last week against Troy Christian in a four-set battle (25–22, 26–24, 15–25, 25–19). In its first two games the Lady Bulldogs scraped by on the strong play of Angela Allen, Maya Hardman and Emma Peifer, who had eight kills each over the match. Kennedy Harshaw added six aces, Hardman had 11 digs and Stephani Marion topped the assists with 13.

The YSHS junior varsity volleyball team started its season with losses to Cedarville, Greenon and Troy Christian. In action last week, the Lady Bulldogs dropped to Troy Christian 17–25, 12–25. Topping the statistics for serve aces was Chelsea Horton with two. Horton and Sierra Lawrence both had one kill on the day and Lindsey Jarrell had the game’s most assists with two. Acala Cresi ended the game with the most digs for the Bulldogs, at four.

At the Ohio Classic, Charlotte Walkey ran the first race of the morning – while temperatures were still relatively cool — and did not waste the opportunity. Walkey easily handled the two creek crossings in the 1.9 mile course to finish 11th overall in 13:11, out of 116 total runners. Walkey kept pace with the front runners throughout as she finished the first mile in a speedy 6:18.

The McKinney seventh graders set the pace this past weekend at the cross country meet at Liberty Park in Hillsboro. Christian Johnson and Hayden Orme both medaled. CJ moved up one spot from last week to finish second overall out of the 158 competing runners. Johnson’s time of 10:49 is the fastest ever run by a Yellow Springs runner on the course. Orme was 21st in 12:16. Levi Brown and Sawyer HaleWolf also had superb performances. Brown placed 46th overall in 13:02 with HaleWolf – in his first race – finishing 89th in 14:16.

Each week the News will cover one YSHS sporting event in depth. Visit https://www.ysnews.com every Sunday for a game report and full-color photographs from the match.