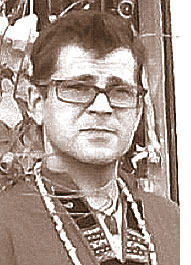 John struggled for many years with the complications of juvenile diabetes acquired at age 12. He did not let his illness prevent him from living the life he desired. Early on, he was a fly fishing guide on the Snake River and lived in Jackson Hole. He was a prolific artist, working in stained and fired glass. A number of area residents, businesses and churches display his work. He also pursued his musical interests and performed his “dub” music around the area. His greatest occupational achievement was the three large stained glass windows in the Risen Christ Lutheran Church on Route 72 south of Springfield. His business was known as Old Sun Stained Glass.

John graduated from Northeastern High School in Clark County and was a graduate of Ohio State University, completing a bachelors degree in fine arts. He was a lifelong student of the spiritual, seeking the dharma in all traditions.

John was a loving father to his sons Carlin James, age 11 and Ian Richard, age 8. John was a dear brother to oldest sister Cynthia G. Olsen and her partner, Susan Alberter, of Yellow Springs, brother David G. and sister-in-law Terri Olsen of Warsaw, Ohio, and sister Susan Beth and brother-in-law Lee Dunham of London, Ohio. John was also a cool uncle to Daniel A. Noll, of Yellow Springs, and Sarah M. Dunham, of London, and a devoted son to mother Judith Mae Billing and stepfather Leroy Billing of London and father Richard G. Olsen and stepmother Melinda J. Olsen of Tucson, Ariz. John has a multitude of relatives residing in Missouri and southern California. He is preceded in death by his maternal grandparents, Harold and Marybelle “Ga-Ga” Gorham and paternal grandparents, Ben and Ruth Olsen, both from the Kansas City, Mo. area. John also had a multitude of friends locally and around the globe who enriched his life and whose life he enriched in return. He will be missed greatly. Jah Knows.