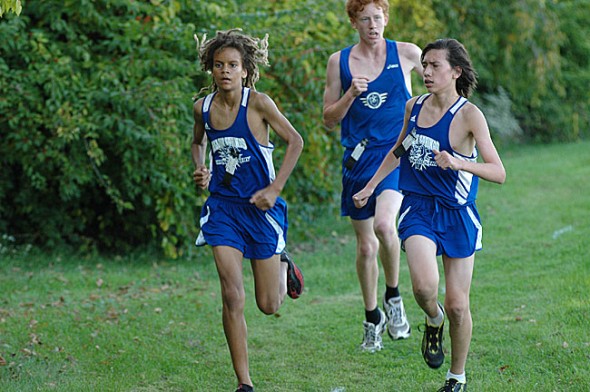 For the team title the YSHS girls team shredded Xenia 18–37, just three points shy of a perfect score in cross country, as as Miller and Alex Brown applied a one-two punch. A Xenia runner kept the Bulldogs from achieving the first perfect score in team history as she outlasted the Bulldog pack of Rachel Meyer (5th), Christina Brewer (7th) and Talia Boutis (8th).

McHugh took the lead from the runner-up shortly before the halfway mark of the two-mile race and steadily pulled away to win by seven seconds. A strong individual effort was turned in by Hunter Lawson, who completed the two-mile course in 12:48, good for a personal record. Freshmen Connor Gravley-Novello and Josh Seitz also improved on their previous bests at the meet.

At the middle school level Johnson came within three seconds of the seventh grade school record with his winning time of 11:35. And his teammates backed him up solidly for the team title as the squad edged Xenia Warner by a winning score of 24 to 31. Hayden Orme finished third with a 13:07, clocking his lifetime best. Lifetime bests also went to Levi Brown (5th), Oluka Okia (7th) and Gabe Trillana (8th).

Walkey roared through the race in 13:18 to take first place among middle school girls.

With the boys soccer season winding down, senior Jacob Trumbull leads the Metro Buckeye Conference in goals, with 28 on the season, an average of 2.5 goals per game. Trumbull is third in goals among all Miami Valley high school soccer players. Trumbull added four more goals over the week in games against Dayton Christian, Newton and Northwestern.

Playing their third game in four days, the Yellow Springs Bulldogs boys soccer team took their battered bodies and tired legs to Dayton Christian last week and fell 4–1 to the area’s number-one ranked Division III boys’ soccer team (Yellow Springs is ranked seventh). The Bulldogs found themselves down 2–0 within the first 10 minutes of the contest, but managed to pull one back when Trumbull was tripped in the box and netted the penalty kick. Two unanswered goals late in the second half put the game out of reach for YS.

On Saturday the Bulldogs got back on the winning track when they hosted Newton. Early on, Ian Chick picked off a weak goal kick and beat two defenders to net the first goal, followed by another off a free kick by Trumbull. Wade “Falcon” Huston netted the Bulldogs’ third goal, assisted by Grant Reigelsperger, followed directly by another free kick from Trumbull. Three minutes into the second half Roland Newsome headed in Reigelsperger’s corner kick for what turned out to be the final goal after a Newton player hit Trumbull in the face and the two teams clashed in a shoving match. So many Newton players were ejected that the game was abandoned with over 35 minutes remaining.

Senior captain Trumbull opened the Bulldogs’ scoring account against Northwestern during Monday’s senior night. Trumbull netted an assist from Reigelsperger for the first goal. Before the break Gabe Rehm split the Warriors’ defensive line with a perfectly-placed diagonal ball to Nathan Miller for the go-ahead goal. In the second half, Chick increased the lead to 3–1 when he intercepted a goal kick and placed his own shot into the nets. Chick then sent Miller to goal for a 4–1 YS victory.

Two weeks ago the Bulldogs won at home against Sidney Lehman and came away with a hard-fought tie at sixth-ranked Waynesville. Goals by Trumbull and Chick (each assisted by the other) put YS up 2–1 at the break against Sidney Lehman. Trumbull closed out the scoring by tapping in one of Edwards’ long throw-ins for a 3–1 win. At Waynesville, Trumbull netted a penalty kick and first-half goal with an assist by Reigelsperger. But the Bulldogs couldn’t keep the lead, and the game ended in a 2–2 tie.

In the best display of teamwork all year the Bulldogs kept a very good Dayton Christian team to 1–0 last week, after losing to them 9–0 earlier in the season. The only goal came off of a Dayton Christian free kick. YS created opportunities to score off of Kara Edwards’ throw ins and from shots from inside the 18-yard line by Edwards, Lucy Callahan, Niki Worsham, and Brianna Ayers.

Taking a break from conference play the Bulldogs fell to Newton 2–0 last week. Newtown scored soon after kick-off but the Bulldogs came back with scoring chances. Zarine Giardullo and Ayers connected for a series of offensive runs but were thwarted by the Newton sweeper. Paloma Wiggins put several free kicks on target, but the Newton defense got to the ball first. The Bulldog defense returned the favor with Keturah Fulton making her third goal line save of the year, Kaila Russell coming off the bench to shut down the outside forward, and Maryah Martin making some outstanding late game saves.

Two weeks ago the Lady Bulldogs demonstrated team unity, improved passing, and intensity in an impressive defensive display against Sidney-Lehman (9–2–2). Martin had an outstanding game with 10 saves and Fulton and Wiggins teamed up to shut down offensive pressure in the middle. Mid-fielders Niki and Jesi Worsham worked closely with fullbacks Lianna Rothman and Ali Soloman to shut down crosses. The team lost 5–0.