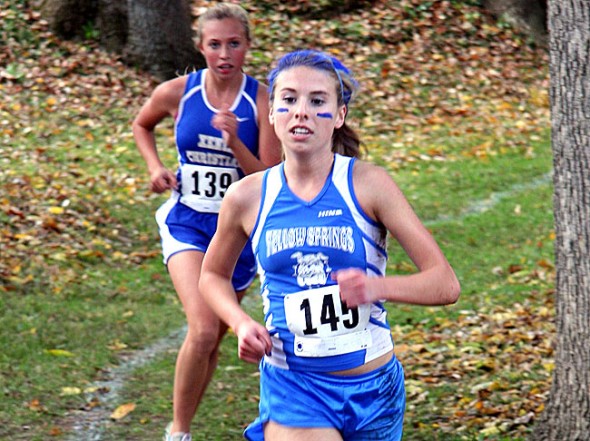 Alex Brown leads Xenia Christian’s Sarah Kensinger at Middletown Christian at the league championships for cross country. Brown went on to finish sixth overall and join Lois Miller on the Metro Buckeye Conference All League Team. Miller was 2nd overall as the duo led the Bulldogs to the runner-up position in the team standings at the conference championship. Xenia Christian topped the Lady Dawgs 21 to 34. (Submitted photo by Vince Peters)

Miller, ranked second going into meet, ran strongly throughout the 3.1-mile race to finish second out of 28 women with a time of 20:36 — her second-fastest this year. Brown, ranked seventh entering the meet, improved to sixth in 21:37. The top seven finishers were recognized as first team All-League.

The Bulldogs had 34 points to meet champion Xenia Christian’s 21.

Zoey McKinley had the biggest improvement of the day as she lowered her lifetime best to 29:03. Ashley Merrit and Mary Triplett completed the course, and the Bulldogs had more runners finish the course than any other school in the league.

The YSHS boys cross-country team had won five of the past six league championships going into last year’s meet, which they finished a close second. This year the relatively young team slipped to seventh.

But despite the finish the Bulldogs had a number of personal best performances. Behind returning runner Zach McHugh’s 17th place finish in 19:05 were lifetime bests for new runners Hunter Lawson, Josh Seitz and Eli Mulhall, who finished 36th, 59th and 63rd, respectively, in the varsity race. In between Lawson, and Seitz, freshman Connor Gravley-Navello turned in another consistent performance to finish 52nd in 22:40.

Girls soccer drops one at home

Last week the girls soccer team finished its regular season at home against Miami Valley. YSHS had some trouble adjusting to the muddy conditions and went down 5–0 in the first half. Nikki Worsham and Lucy Callahan played well in the mid-field with Worsham pushing forward to help generate offense. Keturah Fulton and Paloma Wiggins played well in defense and with Lianna Rothman’s goal line save in the 21st minute kept the Miami Valley Rams to two goals for a final score of 7–0.

Two weeks ago the girls varsity volleyball team ended its regular season by winning two of three matches, defeating Thurgood Marshall and Dunbar after falling to Dayton Christian. Taking on Dayton Christian at home, the Bulldogs fell to the conference leader, 13–25, 16–25, 17–25. Kennedy Harshaw led the Bulldogs with eight kills, while Maya Hardman was the star of the game with three aces, eight blocks and 12 digs.

Harshaw and Hardman continue to top the Dayton area leaderboard for the season. Harshaw is currently second in aces, with 66, while Hardman is in seventh place with 54. Hardman is eighth in blocks with 53.

After playing just one game, the YSHS junior varsity football team’s season was canceled last week due to lack of players. Early in the season, three games were canceled by opponents and because of this long stretch with no games, interest dropped, according to YSHS principal Tim Krier this week.

Last year’s football season was cancelled for the first time since 1993 when the high school program was only able to field 11 players. At the beginning of the 2011–12 school year, about 18 players had committed to the team. But in recent weeks, the number of players at practice had dwindled to under 10. Coach Craig McCann had to cancel last Saturday’s game which was followed by a decision by athletic director Steve Rossi to cancel the rest of the season.

“We wish we had the enthusiasm that we had in August,” Rossi said this week. “Football just takes so much more of a commitment.”

Krier and Rossi will look into starting next fall a local club football team, which would not be affiliated with YSHS.

Yellow Springs seventh- and eighth-grade runners dominated the Metro Buckeye Conference. The young Bulldogs packed five into the top nine finishers overall, behind the leadership of seventh-grader CJ Johnson, who was edged at the line by Troy Christian’s Eric Cooper. Both runners were timed at 12:11.

Hayden Orme gave the Bulldogs an unbeatable 1–2 punch as the young distance star secured third place out of 45 runners in a lifetime best 13:02.

The Bulldogs beat their closest competitor by 38 points and came away with the league championship.

Charlotte Walkey excelled once again, this time finishing second overall in the middle school cross-country race for girls. Walkey, an eighth grader, completed the two-mile race in the outstanding time of 13:31.

“Charlotte will play a huge role in the future of athletics in YSHS with her talents as a runner and race walker,” Coach Vince Peters said.