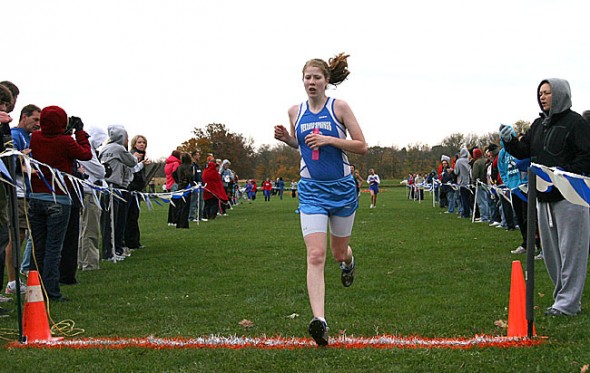 Lois Miller crossed the finish line first to win 26th Annual Yellow Springs Invitational at Young’s Dairy for the second year in a row. Miller’s time of 19:41 was a lifetime best. Later in the week, Miller qualified for regionals. (Submitted photo by Vince Peters)

Junior harrier Lois Miller capped an exceptional week by qualifying for regionals on Saturday. After winning the 26th Annual Yellow Springs Invitational last week for the second year in a row and in a lifetime best, Miller placed seventh in the district tournament. At districts, Miller’s 20:34.55 five-kilometer run was good to qualify for next weekend’s regional tournament.

At the Yellow Springs Invitational, held for the first year at Young’s Dairy because of unsafe conditions at John Bryan State Park, Miller improved upon her 2010 time of 20:06 to 19:41, a new lifetime best.

Under the lights at YSHS, the boys soccer team hammered Fairlawn 10–0 in the first round of sectionals. Senior captain and Metro Buckeye Conference goal leader Jacob Trumbull had a hat-trick on the night, while Ian Chick scored twice.

Just five minutes into the contest Wade Huston gave the local team the lead off an assist from Trumbull. In the next six minutes, Trumbull netted two goals of his own, including a one-touch, redirected shot at the near post off of a Cole Edwards long throw-in.

The second half opened with more of the same as Grant Reigelsperger sent Ian Chick to goal and three minutes later Reigelsperger was at it again, setting the table for Fielding Lewis to knock the ball in from 12 yards out. A few minutes later it was Henrik Korsch who found himself on the receiving end of another Edwards long throw-in for a tap-in at close range, and a 6–0 lead for the home side.

Later on, Trumbull earned a penalty kick when he was tripped in the penalty box. Edwards stepped up to take the spot kick and knocked his shot off the inside face of the right post for his first goal in his four-year high school soccer career. Two minutes later Jared Scarfpin sent Kane Willis to goal for an 8–0 lead. Less than a minute later Chick took a corner kick for the Bulldogs and curved his kick just past the near post and into the back of the nets. Trumbull closed out the scoring with 21 minutes left to play, assisted by Willis, giving the Bulldogs a 10-0 win.

The girls cross-country team, despite a stellar performance at districts, finished in seventh place, just a few points shy of qualifying for regionals as a team last week.

“The women’s team had a very good year,” said coach Vince Peters. “To come so very close to being in the regional finals is hard emotionally. But this team of women has both the character and dedication to come back next year stronger and faster”.

“I want to thank the team’s lone senior, Mary Triplett, for all her years of dedication,” said Coach Peters. “Her energy, smile and wit will be missed.”

At the Yellow Springs Invitational, the high school girls team was sixth out of 18 squads behind the first-place finish of Lois Miller. Brown had one of her better races of the year as she placed seventh in 21:08. And Brewer dropped from her old season best of 24:02 to an outstanding 32nd place finish in 22:49. Meyer and McKinley completed the scoring for the Bulldogs. Meyer came in 51st in 23:51 and McKinley had the fastest race of her life while placing 124th in 27:51.

The lady Bulldogs conclude their season with 82 wins and 43 losses.

Seniors Zach McHugh and Eli Mulhall completed their cross-country careers at Saturday’s district meet. McHugh placed 36th in 18:56. Mulhall completed his senior season, his first on the varsity squad, with a lifetime best of 23:36. He placed 87th.

“Zach had a remarkable career,” said coach Peters. “He stands 16th on the all-time list of the best harriers in Yellow Springs history with a lifetime best of 17:36. Eli always made coaching fun with the big smile he always had while racing. I wish them both the best.”

Freshman Connor Gravley-Novello and Josh Seitz will be coming back in 2012 with the experience to help coach Peters rebuild the Bulldogs back into contenders. Gravley-Novello was 69th in 21:19 with Seitz 85th in 22:56.

The girls soccer team ended its season in the first round of its sectional tournament. The Bulldogs traveled to first-seed Bishop Fenwick, a team which won the state tournament three years ago. The Lady Bulldogs went down by a few goals early but rallied after a free kick from 35 yards was converted to a goal by Paloma Wiggins.

Seniors Katie Triplett, Paige Evans and juniors Lucy Callahan and Nikki Worsham helped to move the ball but Fenwick controlled possession early in the second half. The Bulldogs found the net again with a goal from Kara Edwards off a free kick by Wiggins. Maryah Martin had 18 saves for the game as the Bulldogs held Fenwick to three goals in the second half for a final score of 8–2.

The Yellow Springs Bulldogs ended regular season play against the Miami Valley School at home two weeks ago. The Lady Rams adjusted to muddy field conditions quickly to go ahead early in the first half. Once the Bulldogs found their feet the defense led by Wiggins and Keturah Fulton held the Rams scoreless until Miami Valley slipped two into the back of the net right before halftime. The Bulldogs’ offense produced shots by Edwards, Callahan and Worsham but they were stopped by the Rams’ keeper.

The Bulldogs finished the year 1–14 but showed remarkable improvement over the short season, according to coach Sarah Wallis.

“Every player improved in the areas of individual skill, coming together in outstanding team play for a late season run,” Wallis said.

All five of the McKinney boys cross-country team ran their lifetime bests at the Yellow Springs Invitational last week. The peak performance by all five runners led to the Bulldogs to place fifth out of 21 squads.